The police in Ogun have arrested a 70-year-old man, Gabriel Akindele, for allegedly defiling an eight-year-old deaf and dumb child in Owode-Ijako, Ado-Odo/Ota Local Government Area of the state. 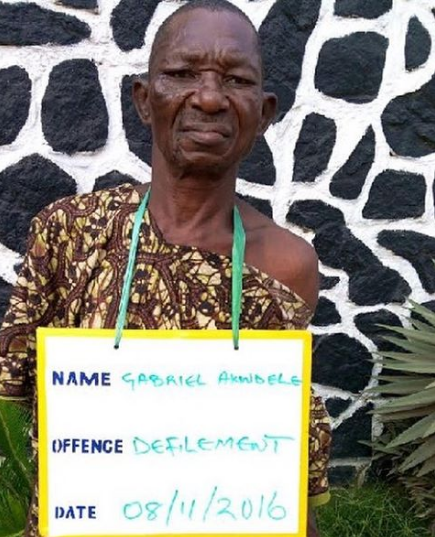 The suspect was arrested following a complaint from the mother of the girl, who noticed an unusual behaviour by her child after the incident and through the use of sign language, she was able to ascertain what the septuagenarian had allegedly done to her.

The mother then reported the matter to the police.

The Divisional Police Officer in charge of Sango Ota, Akinsola Ogunwale, was said to have deployed detectives to the area to arrest the old man.

On interrogation, the 70-year-old man confessed to committing the crime.

He was said to have confessed that he lured the little girl to a toilet, where he unlawfully had carnal knowledge of her.

The state Police Public Relations Officer, Abimbola Oyeyemi, said that the Commissioner of Police, Ahmed Iliyasu, had directed that the case be transferred to the Anti-human Trafficking and Child Labour Unit of the State Criminal Investigation and Intelligence Department for proper investigation