Go Back To School, Your Problem Is Ignorance - Wole Soyinka To Those Criticizing Him


Professor Wole Soyinka, has been lately attacked over his threat to tear his Green Card on the day the US-President elect, Donald Trump would be sworn-in. 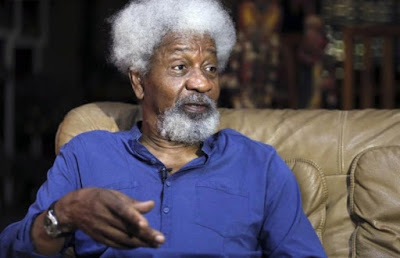 Reacting to the attack, the playwright, in a statement he signed titled, “Red card, green card– Notes towards the management of hysteria”, said he would carry out his threat but not at a time fixed

According Soyinka, those asking him to carry out his acclaimed threat were ignorant of whatever they comment on. He said,

“Let me end with a Red Card to those noisome creatures, the nattering nit-wits of Internet: maybe Trumpland is not as despicable as the Naijaland you impose on our reality from your secure cesspits

of anonymity. Go back to school. Your problem is ignorance, ignorance of whatever subject you so readily comment upon. Learn to study your subject before opening up on issues beyond your grasp. Sometimes you make one feel like swapping one green for another, out of embarrassment for occupying the same national space as you.’’

‘ If it even becomes convenient to bring it forward, I intend to do so, but please don’t come at me with plaints of time imprecision. I never discussed it with you, nor invited you to a private decision whose execution was already in the making. Do not try to browbeat me. It’s a waste of time, all you have to do is immerse yourselves in my antecedents. It will not attempt to deal with the notion of an exit time-table as conceived by others.’’