The Police at Maroko division, Lekki, Lagos have arrested a couple, Paul Nnamdi Obodo a.k.a Opoko, 33 and his wife, Cynthia Obodo, 28 for allegedly stabbing their neighbours, Moses Ayemi and his wife Jovita Ayemi with broken bottle 10 times, PM News reports. 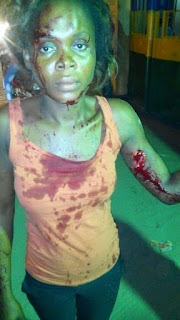 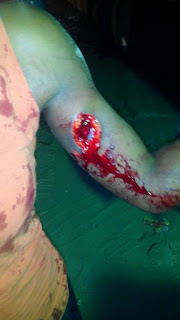 The victims, according to the police charge sheet, were stabbed for allegedly accusing the suspects of pouring urine on their doorstep.

The victims were rushed to the hospital for treatment while the suspects were arraigned before an Igbosere Magistrates’ Court, Lagos on a two-count charge of felony, to wit: inflicting injury occasioning bodily harm.

Police prosecutor, Sergeant T. O. Tubi, informed the court in charge No N/11/2016 that the couple committed the alleged offence at 8, Bakare Street, Ikate, Lekki Phase I, Lagos where they reside with the victims.

He said the complainants told the police that they warned the suspects not to pour urine on their doorstep but they failed to heed the warning.

He said the offences committed by the couple were punishable under sections 409 and 244 of the Criminal Laws of Lagos State, 2011.

The couple pleaded not guilty to the charge in the open court and the magistrate, Mrs. O. M. Ajayi admitted them on bail in the sum of N50,000 each with two sureties each in like sum.

Ajayi adjourned the case till 28 November, 2016 for continuation of trial.