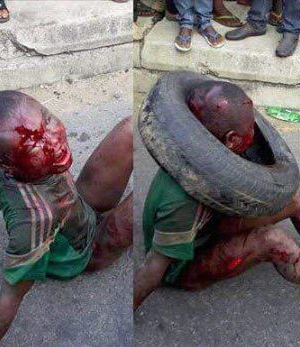 A Lagos lawyer, Kingsley Ughe has given the real account of the viral photos of the man lynched in Lagos. Read after the cut...

A THIEF AND A FRENZIED MOB BAYING FOR BLOODThe true accounts of the young man lynched and summarily burnt to death at Orile Iganmu last Saturday speak of the uncertainty and brevity of human life in Nigeria. It was Saturday, the 11th day of November 2016. The venue of this macabre killing orgy was at Augustine Onwualu Street, Orile Iganmu, Lagos. A woman, (name withheld) was walking along the ever busy road of Augustine Onwualu street, Orile Iganmu. She had an Infinix Hotnote 2 handset with which she was making telephone calls in high pitched voice, frantically gesticulating in the process. Close by, on the same street were a gang of 4 notorious thieves, well known in the area for their dare devilry and viciousness. They were there, waiting, prowling and surveying the entire scenery for a vulnerable victim to rob and dispossessed of their valuables as they often do in the past. And successfully too. The woman approached. Still talking on the phone and gesticulating with her free arm. She was immediately spotted by the very perceptive eyes of this criminal gang. A brief conference amongst them, she was adjudged a soft target. There was no need for further plans or careful surveillance. After all they had done this successfully in the past. More so, their sheer ferocity makes them a sort of feared mobster in the local vicinity. But it turned out to be a miscalculation. And costly one at that! They approached and circled the woman who was oblivious of her surrounding and the imminent attack on her person. The robbery attack was swift and very decisive. She was held from behind by two members of the gang. One of them deftly pruned her hand bag off her shoulder and the same time attempted to retrieved the telephone with which she was making calls from her other arm. The last of the gang stood guard, providing cover for the others. They had during their planning stage misjudged the desperation of a Nigerian woman about to be dispossessed. The victim reacted swiftly. She let the hand free and held on tenaciously to her phone. A struggle ensued. The victim plaintively cried out for help. A motley crowd gathered. The other members of the gang, appropriately appraising the situation fled the scene. The fourth member was not so lucky. He continued to engage in an internecine struggle with victim for the phone. In desperation, he brought out a dagger, and cold bloodedly stabbed the woman repeatedly in the chest, stomach and shoulder. There is a proverb, when a strong animal flirts too much with the trap, he makes his meat available for children to share with teeth.

The gathered crowd became enraged and promptly apprehended the abandoned thief. He was beaten to stupor, Tied up and set ablaze while the maddening crowd continued to bay for his blood. Joint Action Aid was alerted on Monday when video clips of the dastardly murder went viral on social media. We reported the yet another resort to "jungle justice" to the Commissioner of Police, Lagos state. The video clips were carefully analyzed and some arrest made. The six people arrested through our efforts denied criminal culpability and brought fast talking lawyers. More frustrating, the charred remains of the alleged thief had been removed. The area council and Orile Iganmu police claimed ignorance of the whereabouts of the corpse. Thus we have a dead zone situation. No dead body, no witnesses and then, most understandably, an unwilling complainant still battling for survival from the grievous multiple stabbing at the hospital. We returned back to the office, again defeated. Frustrated. And defeated.The rule of law is vanquished again. The rule of the jungle continues to win triumphantly. Kingsley Ughe ,a legal practitioner and General Counsel of the Joint Action Aids, can be reached via k.ughe@aol.com"