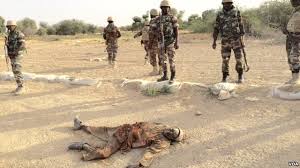 The Nigerian Army engaged Boko Haram in Borno leading to the death of seven terrorists.

In a statement by Col Sani Usman who is the spokesperson of the army, he said troops of 119 Battalion Group of 8 Division deployed to Kangarwa village engaged in a gun fight with the terrorists.

Apart from the seven terrorists who were confirmed dead, several others escaped with gun wounds.

Five soldiers also sustained gun wounds and have been evacuated to the hospital for treatment.

It was reported that the terrorists were the same that attacked Dasa village on Tuesday, November 15 where they were repelled by soldiers.

A suicide bomber has been gunned down by vigilant Nigerian security operatives in Maiduguri, Borno state.

According to PR Nigeria, the suicide bomber attempted to penetrate a Transit Camp of Internally Displaced People (IDPs) along Muna Garage.

“While suspecting the ulterior motive of the suicide bomber with his strange behaviour, the security operatives attempted to accustom him.

“But in his attempt to detonate the explosive device, he was gunned down by the official”

IDP camps have recently become prime targets of the Boko Haram in suicide attacks. Many of such attacks have failed and the suicide bombers killed.