Nobel laureate Prof Wole Soyinka yesterday came down hard on Nigerians who questioned the sincerity of his claim that he had dumped his United States green card. 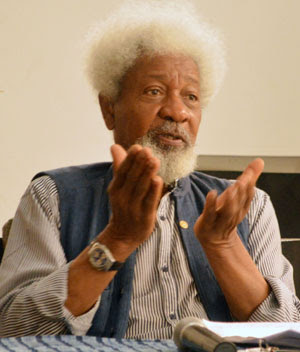 Prof. Soyinka last week in Johannesburg, South Africa, announced that he had dumped his green card in fulfilment of his pledge to do so should Donald Trump win the U.S. presidential election.

But some Nigerians questioned the claim in various social media posts.

Angered by this, Soyinka, who said he got the green card during the days of struggle against military rule in this country, told reporters in Lagos:

”Our common sense is totally lost. I am embarrassed sometimes that I occupy the same nation space with some people.  Where is the arrogance coming from? What right do they have to tell me that I have no right to take a decision in a particular way? I never took orders from (the late) Sani Abacha, why should I take orders from you? Let us have a little respect and spirit of tolerance. I can decide whether to use a garden shell or scissors for my green card. What is the business of any Nigerian to challenge me on my decision? Green card is even more important than human beings. Barbarians have taken over the country, using the anonymity of the Internet. They sit somewhere, writing about me, questioning the right of me to express myself.”

“I am not an entertainer. Why should I entertain you on that? I am a dramatist. When I say I have done something, Ogun (the god of iron) is my guiding spirit on it. Maybe I should be exiting Nigeria and not the U.S. People that one dedicated one’s life of struggle to can be so slavish in mentality to query the right of their champions to freedom of expression.”

“If I decide to leave the U.S., it is my personal decision and not that of the millipedes of the Internet. Why do Nigerians weep more than the bereaved? Trump is not really my business. He has been elected. He should do his work. There are born-again humans in all areas, why not in politics? Even the stock exchange reacted to Trump’s election. I also reacted in my own way. There is freedom of expression. We have far too many illiterates in this country.’’

The playwright, who said he might consider Wolexit 2-a word he coined on his planned exit of the U.S.- added that he would relocate the Soyinka Foundation outside Nigeria.

“It is a significant decision on my part in response to the stupid melodrama. Exit can take two forms; internal or external. I can stay put in my private Green Belt – the one I have named the Autonomous Republic of Ijegba,’’ Soyinka said.

He said his former students, including Prof. Femi Osofisan and Prof. Biodun Jeyifo, always took him up on issues.

Soyinka plans to hold a private funeral on January 20, the day Donald Trump will be inaugurated as president, “to mourn the death of common sense in Nigeria and not to bewail the citizens of the U.S. over their choice of president”.