A Togolese man named Fidelis Bossman, who allegedly murdered a four-year-old boy for rituals has reportedly died in police custody. 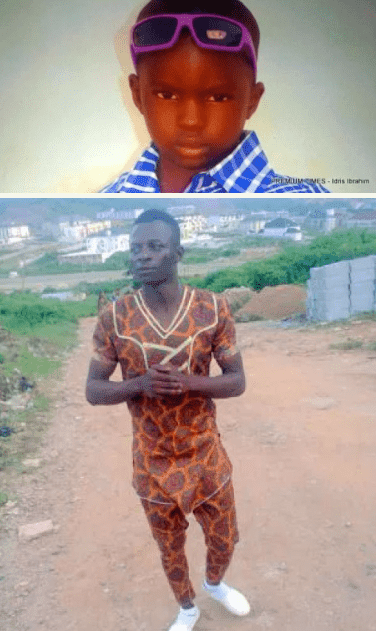 According to PremiumTimes, the police claimed that Fidelis took ill and died during interrogation.

But the father of the victim, Johnson Habila Magaji, said he suspected the claim was a sinister attempt to pervert the course of justice.

The minor, Psalm Johnson, was reported missing on October 15 from his parents’ Kuruduma 2, Ugwan Hausawa residence in a rural suburb of the Asokoro Extension in Abuja.

A petty trader running a kiosk in the neighbourhood, however, provided a crucial clue when he

recalled seeing little Psalm in the company of Boniface Sani, a young man who lived with his parents in the same compound as the Johnsons.

Boniface acknowledged that little Psalm had been with him.

“He claimed however that when he wanted to visit his friend in another part of the village, and because it was about to rain at the time, he instructed the boy to go inside our compound”, Mr. Johnson narrated to PREMIUM TIMES.But the trader, Mahmud Magaji, insisted he had seen Boniface walking away from the compound with the little boy. Under interrogation the following day at the A.Y.A Police Station, Boniface later confessed he had sold off little Psalm to Mr. Bossman for N100,000.

Eight days after little Psalm had gone missing, the Police were able to apprehend Mr. Bossman, who confirmed the transaction. He however revealed that both of them had immediately strangled the little boy to death, in a money-making ritual.

The two suspects later led detectives to a riverside behind Asokoro village where the decomposed body of the boy was recovered.

But two days later on October 25, the case took a strange twist.

According to Mr. Johnson, when he went to the Police Special Anti-Robbery Squad, SARS, to which the case had been transferred, an officer informed him that Mr. Bossman had died.

“At first, an officer told me that the Togolese had died under interrogation”, Mr. Johnson told PREMIUM TIMES. “Shortly after, another policeman said he had fallen sick and died in a hospital”.He said he was later shown a picture said to be of the body of the suspect.

“But I could not be sure whether the person in the picture was actually dead or posing dead to the camera,” Mr. Johnson said. 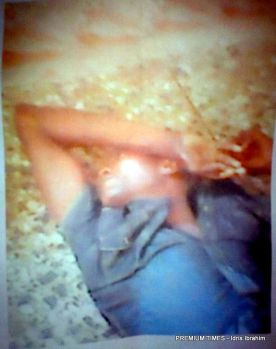 Lifeless body of Mr. Bossman given by Nigerian Police Force

PREMIUM TIMES reports that when they visited the A.Y.A police Station where the case was first reported, the Divisional Police Officer, Aisha Yusuf, said she knew nothing about the Togolese. She said her officers only arrested Boniface before

“I had to hand over the case to the CID, because we don’t handle cases like murder and abduction.”At the FCT Police Command headquarters, an officer identified as Hassan Abdullahi also said he was not aware of the death of the Togolese. He claimed that the two suspects were still under custody and that investigation was still ongoing.

“When we brought in the suspects, one of them, quite unfortunately the principal suspect, was complaining that he was sick. Our men, after discovering he was not feeling too fine, rushed him to the Police Hospital”, Mr Mamza said.“We normally take suspects who fall ill to the Police Hospital. So, after proper examination by our medical doctor at the hospital, he gave recommendation that the suspect be taken to Gwagwalada Specialist Hospital. We however lost him on the way. Autopsy has been taken on the suspect.”Mr. Mamza said the body was in the morgue of the Gwagwalada Specialist Hospital, as nobody had yet come forward to claim it.

“Investigation is still ongoing. The remaining suspect will be charged to court at the completion of investigation”, he said.The Police spokesman also explained reasons why the suspect was yet to be arraigned despite his alleged confessional statement while being interrogated by SARS.

“There is nitty-gritty in confessions; you have to understand the rationale behind what was done before taking the accused to court”, he said.“You have to be sure of your facts, figures and the evidence that will be used to prosecute so you don’t go and present what is shabby and fail to get the appropriate punishment for the offender”, Mr. Mamza stressed. “There are procedures to follow when such investigations are ongoing”.At the Gwagwalada hospital, a mortuary attendant who refused to give out his identity confirmed that the police deposited a body at the mortuary on October 26.

But the deceased was registered as Fidelis Sirboss, not Fidelis Bossman. The attendant however would not allow the PremiumTimes reporter to inspect the mortuary’s record or the body deposited by the police.

PremiumTimes adds that for the Johnsons, they continue to grieve over the murder of their son. They said they hope the surviving suspect has his day in court and that their suspicion of an attempt to obstruct justice is unfounded.