Ex-Arsenal defender Emmanuel Eboue has told the Daily Telegraph his one-year ban from football following a contractual dispute with a former agent has left him feeling suicidal. 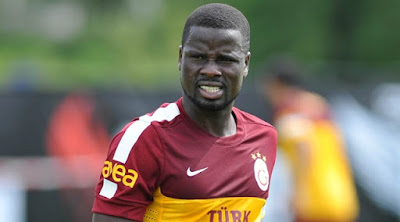 Eboue, 33, was suspended by FIFA from all football activities in March due to the disagreement with his representative and immediately had his contract with Sunderland terminated despite having signed for the club earlier in the month.

professional player he met in London in a bid to stay fit while he serves his ban.

Even once Eboue’s ban is served, however, he may still not be permitted to return to football activity until he has settled a debt with his old agent Sebastien Boisseau, reported to be in the region of £1 million.

There are a lot of days when I don’t feel like getting out of bed,” Eboue, whose grandfather and brother both passed away in October, said.

“One day I wanted to kill myself. My family keep me strong, it’s them that I have to think about but if I was alone, I worry about what I’d have done to myself by now.“There are times when I stay in my bedroom and don’t come out. One, two days in that room.Alone. I lock the door and I’m just thinking. I spend a lot of my time reading the Bible and will say, ‘Emmanuel, why are you doing that? It’s no good for your family.“My son Mathis is seven and plays for Arsenal’s academy. Every time I go there with him people ask me what’s going on and it makes it worse. ‘Emmanuel, have you retired?’ So I have to explain my situation. It makes me more depressed. The people who know me, when they see my face, they can tell I’m not happy. This is the lowest I’ve been in my career, it’s a bad time.”The full-back had been hoping to count on the support of his old Ivory Coast teammates, but he admits Didier Drogba and Romaric are the only two to have got in contact with him.

ESPN reports he says the lack of contact from Kolo Toure is particularly disappointing, given the Celtic player was banned by FIFA himself in 2011 for failing a drugs test while at Manchester City.

“When Kolo was serving his ban, I was always talking to him,” Eboue said. “He’s had some difficulties at Celtic so I understand (why he’s not been in contact). I’m not going to say something bad. All of them are my big brothers.“I know they know my problem but I hope one day they will call me. Of course it’s disappointing. I thought the friendship was stronger. You have to be friends in difficult times. But that’s life. I take it in a good way.”