A 44-year-old man, identified as Sunday Ibrahim, has alleged strangled his 14-year-old son, Musa Ibrahim, to death, following the dissolution of the couple’s marriage by a court in Abuja. 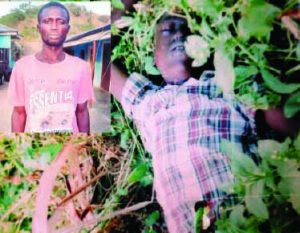 His act, which happened in Kabusa village in Apo area of the Federal Capital Territory, FCT, Abuja, was said to be an ‘unimaginable show of heartlessness and an extreme case of hatred for his ex-spouse’, the Sun reports.

The FCT Commissioner of Police, CP, Mohammed Mustapha, confirmed the incident on Friday, saying the court granted the ex-wife custody of the couple’s children.

According to him, Ibrahim’s primary reason for the abominable act was to cause the ex-wife absolute heartbreak and ensure that she would never see the teenage son again.

“After killing the son, Ibrahim ran to the house of his uncle, Haruna Isah, who resides at Airport road, Abuja, to confess that he had killed Musa. Isah promptly reported the matter at the Ido Police Station. He also arrested Ibrahim and handed him over to the Apo Police Station, from where the case was subsequently transferred to the homicide section of the FCT Criminal Investigation Department of the police command. When detectives took Ibrahim back to his residence to conduct a search, they discovered the sandals of the deceased teenager in the father’s room,” the CP stated, assuring that the suspect would be charged to court soon.

Isah, on his part, recalled that he brought him (the suspect) to Abuja and trained him.

He said, “I was aware that his wife was no longer with him again. It was one fateful day that Sunday Ibrahim came to my house early in the morning and confessed to me that he had strangled his son, Musa Ibrahim, and wanted me to help him.

“I was deeply shocked and momentarily confused. When I regained my sense, I quickly ran to Ido police station on airport road to make a report. I also arrested him and handed him over to the police. In the statement he made to the police, he said he did it to punish his ex-wife,” Isah confirmed.

Meanwhile, reports say Ibrahim had previously attempted to kill his 17-year-old daughter, Maimuna Ibrahim, by serving her poisoned food, although, she did not eat the food, after which Ibrahim threw the poisoned food away.

Speaking on the incident, Ibrahim’s ex-wife, Zanaib Ibrahim said, “I sued my former husband for divorce and the court dissolved our marriage in 2015.

“The court granted me custody of our six children, to take care of them. But my ex-husband had been monitoring Musa.

“He went to where the boy was learning tailoring and bought him suya and soft drink, which he used to deceive and lure him away and then strangled him.

“He did it to punish me. I waited for my late son but I didn’t see him,” she sobbed and continued, saying, “I went to meet the man who was training him, Umar Maitalata, who told me that my ex-husband took him away after the close of work.

“I called my ex-husband’s phone four times but he refused to pick my calls.

“The following day, I saw him and asked about my late son. He said that the boy was dead; it was somebody who showed me the corpse of my son at Kabusa farm.

“My ex-husband is an evil person and not a responsible husband. He attempted to poison my first daughter Maimuna, but she noticed the poison in the food and did not eat it.

“I want justice to be done over the death of my late son Musa Ibrahim,” she lamented.

In his confession, Ibrahim, an indigene of Adari Local Government Area, Kogi State said, “I was having misunderstanding with my wife.

“She was not contented with the money I gave her. Then, suddenly she packed her things and left my house. She sued for divorce and the court dissolved the marriage.

“So I took our son Musa to Ondo, to hide him there. But she traced him to the place and took him back and registered him to learn tailoring.

“I went to where Musa was learning the trade. I bought suya and soft drink for him and then took him away.

“I strangled my son, Musa, to punish my ex-wife.

“Immediately after killing him, I ran to a native doctor to perform some rituals for me. I also ran to my uncle, Haruna Isah and confessed to him that I had strangled my son and he got me arrested.

“I want my family to forgive me for the evil I have done,” the suspect pleaded.