A woman was left close to death after her "drunk" husband allegedly forced a 40cm rolling pin inside her because she was infertile. 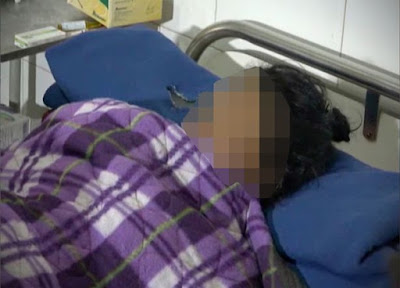 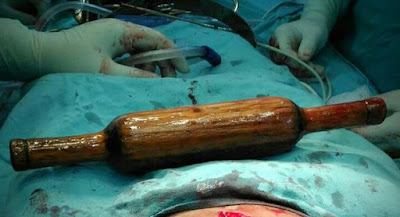 The 38-year-old woman was admitted to hospital in India on Christmas Day after complaining of severe abdominal pains and swelling.

Eventually a team of five doctors operated and were left horrified to find a rolling pin inside her intestines.

The woman claimed her husband often tortured her because she was infertile. He is now on the run

after police launched an investigation.

"We were very shocked. We did not expect anything like this. We could only see a shadow in the X-ray as wooden materials cannot be identified."The internal damage she suffered was very serious and she could have died. The size of the rolling pin was around 40cm long which is a big size to be inserted into a human body."The woman was treated at Dr Sushila Tiwari Government Medical College Hospital, in Haldwani, Uttarakhand, in northern India.

She was initially hesitant to explain how the household item was found inside of her.

Suspecting it was forcefully inserted into her body the hospital authorities informed the police and the National Commission for Women (NCW). 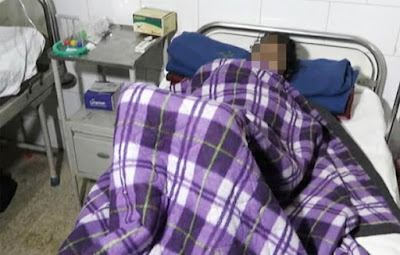 "The matter came to me a day after the operation. The woman was in a terrible condition when I first visited her. She was not only in pain but terrified to speak to anyone."I tried asking her what had happened but she did not say a word and kept crying. Her husband was present at the time."I continued visiting her for three days and eventually she opened up on the third day while her husband was away."She told me she was infertile and her husband often tortured her. On December 22 her husband came home drunk and tortured her again. In an act of brutality, he inserted the rolling pin into her body through anal region and threatened to kill her if she told anyone about it."He kept her locked in the house for two days until her condition worsened. He brought her to the hospital on December 25 however he went missing after we started investigating the matter."Senior Superintendent Janmejaya Khanduri, of Nainital Police, said:

"Both husband and wife are from Nepal. A First Information Report (FIR) has been registered against the husband.

"The woman was hesitant to speak to the police initially but after being counselled by the NCW she narrated her problem.

"Her husband is currently on the run but we have deployed a team of officers to catch him."The woman is being treated free of cost at the hospital and is likely to be discharged next week and the NCW will continue to counsel her.

‘She came to us in a very poor state affected badly with septicemia. Her life was in grave danger but she is currently doing well and we’re positive she will make a recovery. She’s been a very brave lady."Source - Mirror.co.uk