A 22 year old man named Dominic Ogbaji, an indigene of Cross River State, has been arrested for allegedly killing his elder brother, 32-year-old John Ogbaji, while he was asleep, for not giving him pocket money. 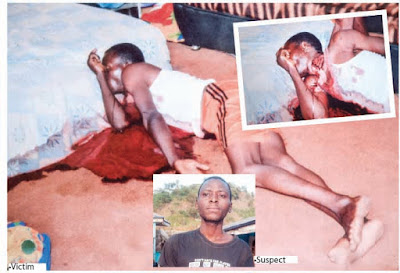 The gruesome incident happened on November 2, 2016, at Ajegunle in Mpape village, FCT Abuja. Dominic is now gnashing his teeth in bitter regret at the headquarters of the Homicide Department of the Federal Capital Territoty (FCT) Police Command, Abuja, where he is being held in custody.

SunNews reports that Dominic came from the village to live with his late elder brother in Abuja, while searching a better source of income.

Prior to relocating to Abuja, Dominic had been a barber but was not earning much and earnestly

wanted a change. So John invited him to Abuja. Not long after he came to Abuja, he began to pester the brother to get him a job.

The situation came to a head on the night of November 2, after the two siblings had eaten their dinner.

Recalling the chain of events that led to the death of the deceased, Dominic told Sunday Sun reporter:

“I came from my village to stay with my sister but she referred me to my elder brother. When I got to his place, I told him I needed a job, but he couldn’t get me a job in Abuja. Rather, I was just staying with him. He was giving me food but not pocket money. Life was so difficult for me, I left my village thinking I would get a job in Abuja. Then, on the night of November 2, he gave me N60 to buy bread for us to eat and water. Later I told him I wanted to go back to the village and would need about N4000. We ate the bread and later watched television together.In the middle of the night while he was sleeping, I took a cutlass from under the bed and cut his throat. After killing him, I took N10,000 from his pocket and his phone and ran home to Cross River.”As Sunday Sun learnt from the Commissioner of Police, FCT Police Command, Mohammed Mustapha, the murder was discovered by a lady in the compound who wanted to charge her phone in the deceased room, who saw the corpse and raised alarm that attracted the neighbours, who reported the matter to the police.

The police then informed relations of the deceased and also launched a manhunt for Dominic, as suspicion of his involvement in the death of his elder grew.

Meanwhile, the mother of the two brothers had heard that her younger son had killed the elder brother.

Dominic, unknown to him that news of his heinous act had reached his mother, got to the village and was received by the mother. Thereafter, she immediately got him bound and transferred to the police, from where he was returned to Abuja, for interrogation.

In the course of the intense questioning, he cracked and spilled the beans on how and why he killed his elder.

“I regret killing my brother because I was hungry and needed pocket money, so the devil pushed me to the evil thing I did,” Dominic said.Mustapha assured that Dominic would be charged to court soon, to stand trial for alleged murder.