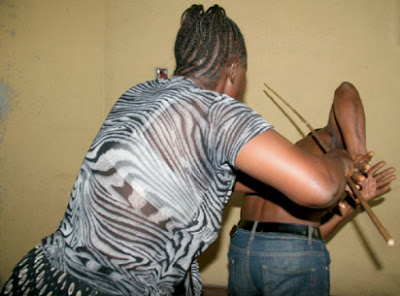 The killer Wife, who has since been arrested by the men of the Anti-Vice squad of the Bayelsa State Police Command, was accused by her husband of collecting the sum of N27,000 to buy a bag of ‘foreign’ rice for the family ahead of the Christmas celebration but brought home a local rice at the cost of N10,000.

Family members told leadership yesterday that though the argument of over the purchase of rice and the alleged diversion of N17,000 started on the 23rd of December,2015, the angry wife allegedly killed her husband on Saturday 7th of January following a heated argument in their room.

It was gathered that in line with the family tradition, the deceased husband was the one responsible for buying the rice and other food stuff needed for the celebration, But the wife insisted on buying the Rice and food stuff for the 2016 xmas season.

It was gathered that the deceased husband, who was sleeping in the room before the arrival of the wife from unknown destination, was dragged unto the tiled floor from his sleep and clubbed with a wood while trying to come to term with the pain from the forceful fall from the bed. It was gathered that he died on the spot.

One of the son of the deceased, Okali Parker, said the killer woman, after realizing that her husband was dead, “she started parking her properties out of the house through the back entrance, while some of the deceased children and neighbors were outside having a quiet time.”

It was gathered that the deceased grandchild, Five years old, made the discovery while playing at the back entrance,” the five years old boy came to alert us that he saw the wife packing properties through the back entrance and dragging his grandpa on the floor with blood.”

“We went to confirm but met the room locked and pretended that we were not aware. When she came back for her fridge, we accosted her and ask her to open the door. But she refused. We forced the door open and met our father on the floor in his pool of blood. She later told us that it was in anger.”