A 51-year-old businessman, Ayobami Oyedutan, and his girlfriend have been killed with petrol bomb by enraged ex-lover of the woman in Ijaye area of Lagos State. 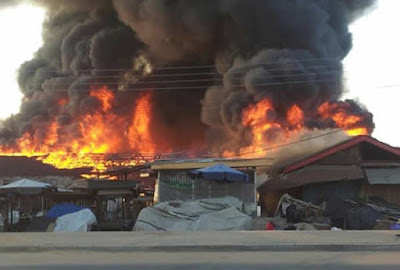 The woman died on the spot, while Oyedutan died on Monday at Gbagada General Hospital following severe burns inflicted on them by the suspected arsonist.

Sources told NAN that the alleged arsonist, who is now at large, was ex-lover to the late beer parlour

Sources say the suspect, simply identified as “Old Soldier,” sprayed the lovers with petrol and set both alight while they were eating pepper soup and cold drinks inside the beer parlour.

“Mama-Corner’s ex-lover, Old Soldier, who was not happy over her alleged unfaithfulness, reportedly became angry and went to the beer parlour, where he allegedly sprayed her and Oyedutan with petrol, lighting them up.“The man who lit the fire also got his clothes burnt as he fled. The woman died in the beer parlour, the lover man died on Monday at Gbagada General Hospital,” the source said.Witnesses said the victims were trapped on the plastic chairs, which also helped the fire before neighbours put it off.

NAN further gathered that the deceased man was buried on Tuesday at his house in Ajasa Village, Command area of Ipaja, Lagos.

NAN learnt that all the three persons involved in the deadly love saga were married to different spouses.

Oyedutan’s wife, Tolu, described his death as “painful loss.’. She said she was with her late husband until he died at about 11pm on Monday.

”My regret now is that my five-year-old son will grow up without a father,” she mourned.The Police spokesperson in Lagos, ASP Dolapo Bhadmus, told NAN that the command was yet to be officially informed of the incident as at press time. (NAN)