A robbery suspect shocked newsmen and the police when he said he believes it's God’s will that he become an armed robber after he was arrested for robbery barely two months after he left prison for the same crime. 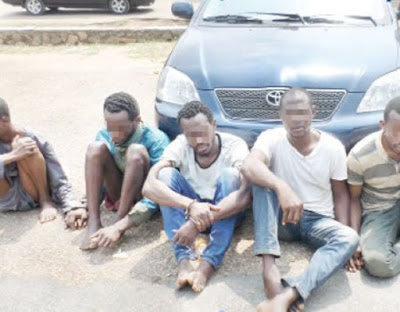 The Saki suspects and the victim’s car recovered from them. PHOTO: OLUWATOYIN MALIK

According to Hussein Mohammed, there is nothing that happens without God’s knowledge as he is the one that created good and evil.

The trio of Salawu Nurudeen, Hussein Mohammed and Ogunbiyi Kola a.k.a. Timmy are ex-jailbirds.

TheNation reports that while Nurudeen left prison in July 2016, the other two came out in August same year. But with their recent arrest along with two others by the Special Anti-Robbery Squad in

Oyo State Police Command, it is most likely that they have paved way for their return to the prison.

They had gone to Arafat Area of Saki town and robbed a family of their valuables, including cash, a Toyota Corolla car, phones and laptops at gunpoint.

“The armed robbers entered my compound in Saki on November 21, 2016 at about 7.45p.m., and held my family members hostage. As I was returning home at about 9.50p.m., I called my wife and daughter, unknown to me that they had been held hostage, though they allowed them to use their phones so that I would not suspect anything.“As I drove in, two of the armed robbers (pointed at them among the suspects) jumped out, put a gun at my chest and asked me to cooperate with them. As I looked at them, wondering what was happening, one of them said ‘continue looking at our faces; we have been told that you are very stubborn,’ warning me of the consequences of the action I might be thinking of taking as my wife and other children were taken hostage inside the house.“I surrendered to them and as we entered into my residence, one of them gave me a slap on the neck. They demanded for gold, money, receipt to my plasma TV and wristwatches I bought from Makkah, Saudi Arabia, when I went on holy pilgrimage.“They asked me to lie down and started ransacking my house. When they were through, they locked me up in a room with my family members and left. They went with six phones, my daughter’s laptop, clothings, my wife’s gold jewellery and my car.After the escape of the armed robbers, a distress call was made to the police, which was followed up by a unit of SARS at Ogbomoso/Oyo axis, leading to the arrest of the suspects.

Recovered from them were an English-made pistol, six live ammunition, a Toyota Corolla car belonging to the victim, a Microsoft cell phone and two wristwatches.

One of the suspects, Nurudeen, confessed to being an armed robber.

“It is true we went to rob. I did not enter the victim’s house with other gang members; I stayed outside. His car was handed over to me after the operation. I met Timmy and Mohammed a.k.a Goodluck in Ilesa prison.When we got talking, I told them I needed a vehicle and they promised to work with me after leaving the prison to achieve my desire. I was a driver before I went to prison for fighting. I was arrested with the car we collected from our victim on the same day at Sabe on Saki-Iseyin Road.”Another suspect, Mohammed from Gombe State, also confessed to being an armed robber.

Metro learnt that he was arrested in 2005 for robbery and remanded in Agodi prison in Ibadan till his release in 2006. In 2012, he reportedly robbed in Ilesa and was in prison till July 2016 when he got his freedom.

“I went to prison because the police were looking for my friends whom they suspected of committing armed robbery.” When asked why he chose robbery after his experience as prison inmate, the suspect replied:

“I believe it is God’s will that I graduated to being an armed robber in the prison. There is nothing that happens without God’s knowledge. He is the one that created good and evil.”Speaking further, he said:

“I knew Timmy in a hemp joint at Ojoo area of Ibadan. A man, an Alhaji who said he was a Tokunbo dealer at Ago Are told us he needed vehicles and gave us a gun to snatch vehicles for him. A guy we met in the prison linked us with Alhaji. I spent three years in prison and came out in July 2016. This is the first time I would be working for Alhaji.Timmy, on his own part, said:

“I will blame the police for charging me court over a fight in which I stabbed someone with a bottle. I knew it was not a good deed, but it was anger that pushed me into the act. It was when I went to prison that I became connected with armed robbers.“In the prison, I connected with Nurudeen and one Ojo who linked us with Alhaji in Ago Are town. I came out of prison in August 2016. I was the one keeping the gun that was given to us by Alhaji.”Metro learnt that Nurudeen, Mohammed and Timmy were charged to Saki Magistrates’ court on February 8 and were remanded in Oyo Prisons. The case was adjourned till April 22, pending an advice from the Director of Public Prosecution. (DPP).