Despite the Supreme Court striking out his appeal against his rival, Rev. Chidi Okoroafor, Rev. Paul Emeka has maintained that he remains the General Superintendent, GS, of Assemblies of God Church, Nigeria.

This came as the GS of the church, Reverend Chidi Okoroafor, said the three-year leadership crisis that engulfed the church should not have been taken to court, but resolved internally. 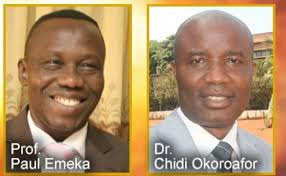 ruling which he said affirmed his leadership of the embattled church, said:

“In the first place, Assemblies of God by biblical standards and our constitution should not have gone to court to settle an internal matter. However, ethics demands that when one takes you to court, you must necessarily answer to show your regards for this quintessential arm of government, the judiciary. This is exactly what happened. When our former leader, Rev Paul Emeka, unfortunately took the church to court instead of resorting to our internal administrative set up capable of resolving any issue, the church responded accordingly. ”However, at a different briefing in Enugu, Vanguard reports Rev Emeka maintained that in as much as the Supreme Court struck out his case based on two technical grounds, the apex court neither pronounced him removed from the position nor  declared Okoroafor as the head of the church.

Emeka, however, said he had almost completed processes of re-filing the matter at the High Court to follow due procedure of application and service. Emeka said: