A South African man named Lopes almost lost his manhood last Thursday when a woman who lives in the same yard as him allegedly poured boiling water over him, because he refused to sleep with her.

The 25-year-old from Palm Ridge, Ekurhuleni said he believed God had sent an angel to protect him. 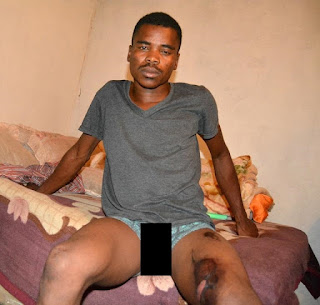 “This woman had beef with me because I refused to sleep with her. She thought I was going to tell her husband and she started swearing at me. “I have not been eating at the main house and I kept it to myself as she asked me to, but she’s always restless.”Lopes said he had accepted that his relationship with the woman had turned sour.

“I stay in my room but she sometimes knocks on the door just to swear at me. I don’t fight back as I have always respected her.“On Thursday, my friend came to visit me and her husband asked us to help other tenants carry a bed into their room. Out of nowhere, the woman came out of the house with a bucket of boiling water and threw it at me, but luckily my friend pulled me away.“The water hit my thighs and she started shouting at me that she wanted to burn my manhood! I am grateful to God that I’m alive. But I want her to go to jail.”Eden Park police spokeswoman Captain Buyisile Mvelase said a case of assault was opened.