A 52-year-old trader, Eze Chukwuma, who allegedly defiled his 17-year-old daughter, was on Thursday arraigned in an Ikeja Chief Magistrates’ Court.

Chukwuma who resides at Iyana-Era area of Ijanikin, Lagos, is facing a count charge of defilement. 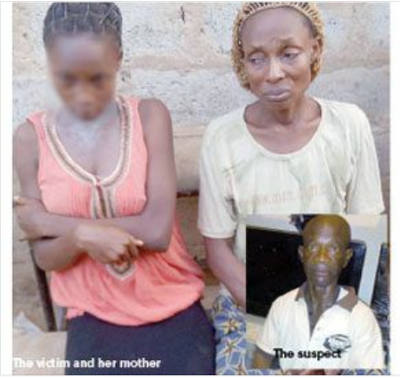 The prosecutor, Sergeant Raphael Donny, told the court that the defendant committed the offence sometimes in June 2016 at his residence.

Donny said that the defendant had been forcefully having carnal knowledge of his daughters since their mother, his wife, died in February 2008.

The victim said that their father usually have his way with her and her younger sister, after threatening to stab her and himself with a knife. The girl alleged that it was his father that `deflowered’ her.

“At night, my father will ask us to separate ourselves so that he could sleep with me, before going to have his way again with my younger sister,” the victim said.

Donny said that the victim’s elder sister ran away from home because their father was always having sexual intercourse with her and she could no longer bear it.

“The case was reported to the police by a neighbour, who the girl confided in,’’ Donny said.

The prosecutor said that the offence contravened Section 137 of the Criminal Law of Lagos State, 2011. The accused, however, pleaded not guilty.

The Chief Magistrate, Mr Davies Abegunde, granted the defendant bail in the sum of N500,000, with two sureties in like sum The case was adjourned till March 29 for trial.