20 construction workers would have been left dead on Thursday, after a two-storey building (still under construction) located on an estate around Nkpokiti junction at Independence Layout, Enugu and believed to be owned by the Speaker of the Enugu State House of Assembly, Edward Ubosi, collapsed.

It was gathered that though some of construction workers sustained injuries, no life was lost in the incident. 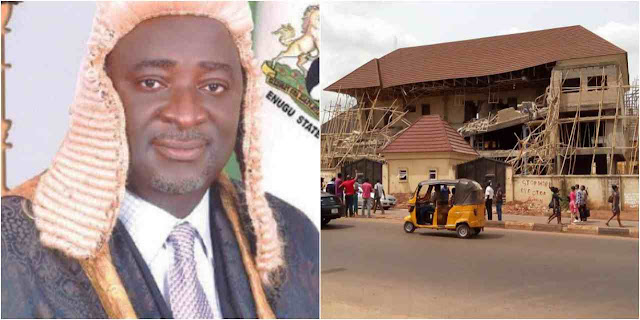 Punchng reports that State commissioner for Enugu Capital Territory Development Authority, ECTDA, Mr. Chidi Aroh, who was present at the scene of the incident after he

got the news, said that whereas his ministry takes full responsibility for the incident, the agency had since August 2016 given a stop-work  order at the site which was disobeyed.

A Punchng source also disclosed that the order to stop work on the site, was flouted because most owners of the buildings under construction in the area, are lawmakers.

Here are more photos of the collapsed building;