The Nigerian Army has denied allegations that soldiers attached to the 147 Battalion in Ikorodu, Lagos, beat a man to death in Ogun State.

The family of 40-year-old Adeola Oyekan had on Saturday said he died on Friday as a result of injuries sustained when he was brutalised by soldiers from the battalion. 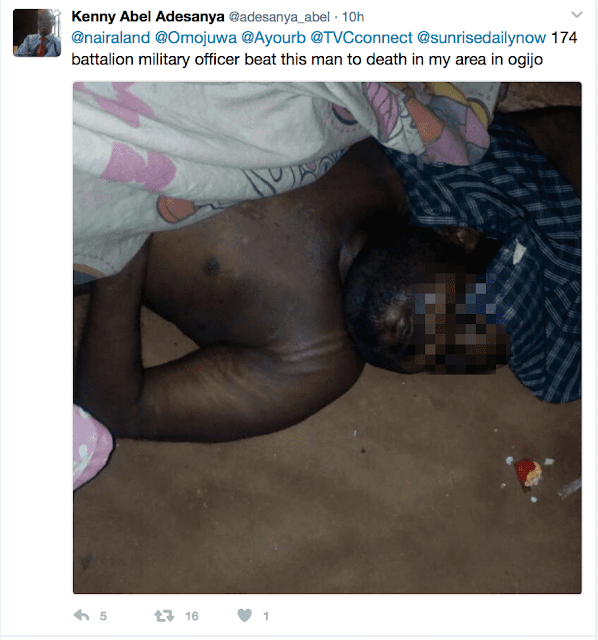 According to the family, one Tunji who is said to be the son of Oyekan’s landlady had invited the soldiers to deal with the 40-year-old and his wife for allegedly being rude to his mother.

Oyekan’s wife said apart from assaulting him at home, the soldiers took the couple to the barracks in

Ita Oluwo were he was further brutalised.

The Nigerian Army, however, said its investigation confirmed that the allegations were false.

In a statement by the Director Army Public Relations, Brig.-Gen. Sani Usman, the Army said,

“For the avoidance of doubt, the location where the incident took place, Ogijo, is in Ogun State and 174 Battalion does not have any deployment there, neither do any of our troops patrol the area.“To further buttress this fact, a team was despatched to Ogijo Divisional Police Station, Ogun State, to investigate the matter.“It was confirmed that the incident dates back to 8th March 2017, one Mr. George (now late), was threatened by the son of his landlady that he will invite his soldier friends to come and beat him for failing to pay his rent which was long overdue. On the said day, the tenant was taken from the compound by three young men and beaten up.“The case was reported to Ogijo police station. The parties involved were arrested and their statements taken.”The Army said the police wanted to take the matter to court but the tenant and the landlady opted to settle out of court. It added,

“The young men who carried out the beating were neither arrested nor their identity ascertained by the police.“The police claimed the landlady son said he used his friends. The case was however treated as assault and discharged. No report was sent to the military authorities because no soldier was involved.”The Army also threatened to sue one Kenny Abel Adesanya, who posted a photo of Oyekan, who the Army referred to in its statement as Mr. George, along with the claim that soldiers were responsible for his death. It said,

“We wish to call on Mr. Adesanya, all other persons that shared the story and the media to understand that Mr. George was not murdered by any soldier, let alone those serving in 174 Battalion and should correct this erroneous impression.“Additionally, Mr Adesanya should render an unreserved apology to 174 Battalion in particular and the Nigerian Army, over this false allegation, failure of which would attract legal action against him.”