It was outrage at the Catholic Diocese of Nsukka in Enugu State after a  masquerade, Oriokpa inflicted matchet cuts, beatings to a Catholic seminarian identified as, Lawrence Ezeugwu, which aftermath put the latter in coma.

'Over the years, the masquerades have remained thorns in the flesh of residents and visitors, who are always forced to part with some money or get the beating of their lives, even as women are being raped. 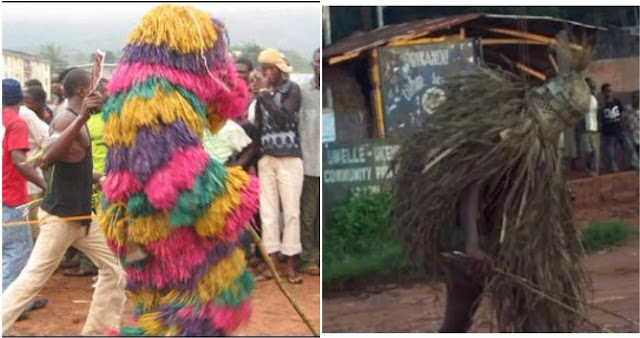 ‎Leading in condemnation of the attack, Prof. Godfrey Onah, the Catholic Bishop of Nsukka, urged law enforcement agencies to treat masquerades that block roads, beat, harm and extort money from people as terrorists and cultists. “It is unfortunate that in this 21st century some youths in Nsukka area will cover their face and block roads, beating and extorting money from people who are going about their legitimate businesses in the name of masquerade. “The security agents should treat these criminals who hide under the guise of masquerade to harass and harm law-abiding citizens as terrorists and cultists,” he said.

According to the Bishop, the Seminarian, who was on his way to the Enugu Electricity Distribution Company (EEDC ) Nsukka district, to pay electricity bill was beaten to coma by a group of masquerades that blocked Enugu Road. He added after beating him, they gave him a knife cut on the head, leading to his now being hospitalized. “This is a sacrilege and an abomination and the church will ensure that all those involved are brought to book, as well as fight to put this evil culture to an end. “As Bishop of the diocese, I am ready to lay down my life in fighting to stop this man’s inhumanity to man by masquerades in Nsukka who block roads, harm people, rape young girls, extort money from road users and intimidate innocent residents,” he vowed.

Onah said the matter was immediately reported to the police and that the police had arrested one of the masquerades. Onah described the masquerades in Nsukka as a cult and a form of idol worship and vowed to deal with any Catholic member engaging in masquerade no matter the position of the person in the church. “The Nsukka Oriokpa masquerade is evil cult and a form of idol worship; anybody engaging in it is worshiping idol,” he said. When contacted, Ebere Amaizu (SP), the Enugu State Police Public Relations Officer confirmed the incident, adding that one of the masquerades was already in police custody. “The police in Nsukka have arrested one of the masquerades that beat and gave knife cut to a Catholic seminarian. “Investigation and efforts are being intensified to ensure that all those involved on that unfortunate incident are arrested and charged to court,” he said.