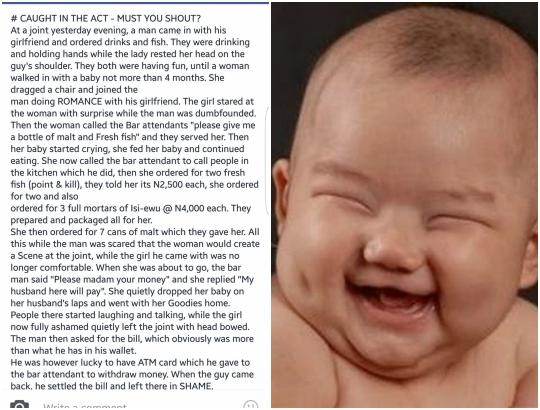 "At a joint yesterday evening, a man came in with his girlfriend and ordered drinks and fish. They were drinking and holding hands while the lady rested her head on the guy's shoulder. They both were having fun, until a woman walked in with a baby not more than 4 months. She dragged a chair and joined the man doing ROMANCE with his girlfriend.

The girl stared at the woman with surprise while the man was dumbfounded.

Then the woman called the Bar attendants "please give me a bottle of malt and Fresh fish" and they served her. Then her baby started crying, she fed her baby and continued eating. She now called the bar attendant to call people in the kitchen which he did, then she ordered for two fresh fish (point & kill), they told her its N2,500 each, she ordered for two and also ordered for 3 full mortars of Isi-ewu @ N4,000 each. They prepared and packaged all for her.

She then ordered for 7 cans of malt which they gave her. All this while the man was scared that the woman would create a Scene at the joint, while the girl he came with was no longer comfortable. When she was about to go, the bar man said "Please madam your money" and she replied "My husband here will pay". She quietly dropped her baby on her husband's laps and went with her Goodies home. People there started laughing and talking, while the girl now fully ashamed quietly left the joint with head bowed.

The man then asked for the bill, which obviously was more than what he has in his wallet.

He was however lucky to have ATM card which he gave to the bar attendant to withdraw money. When the guy came back, he settled the bill and left there in SHAME."

What do you think about her action?