According to Alaofin Kenny Peters who shared the callous story on Facebook, some members of the Special Anti-Robbery Squad (SARS) allegedly abandoned a delivery man after causing an accident in Lagos. Read the full story below 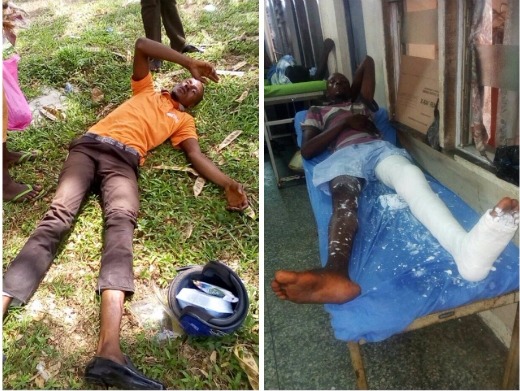 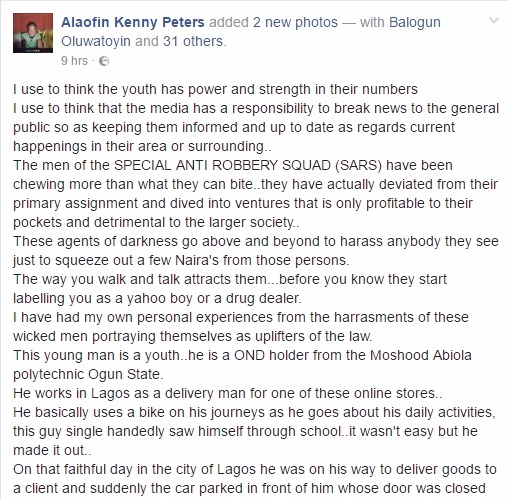 Continue after the cut 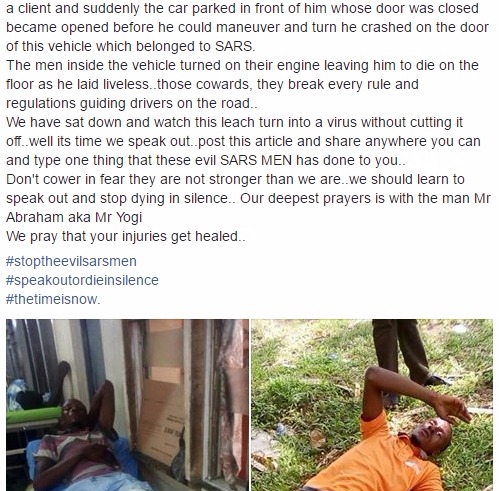 I use to think that the media has a responsibility to break news to the general public so as keeping them informed and up to date as regards current happenings in their area or surrounding.. The men of the SPECIAL ANTI ROBBERY SQUAD (SARS) have been chewing more than what they can bite..they have actually deviated from their primary assignment and dived into ventures that is only profitable to their pockets and detrimental to the larger society.. These agents of darkness go above and beyond to harass anybody they see just to squeeze out a few Naira's from those persons.

The way you walk and talk attracts them...before you know they start labelling you as a yahoo boy or a drug dealer. I have had my own personal experiences from the harrasments of these wicked men portraying themselves as uplifters of the law.

This young man is a youth..he is a OND holder from the Moshood Abiola polytechnic Ogun State. He works in Lagos as a delivery man for one of these online stores..

He basically uses a bike on his journeys as he goes about his daily activities, this guy single handedly saw himself through school..it wasn't easy but he made it out.. On that faithful day in the city of Lagos he was on his way to deliver goods to a client and suddenly the car parked in front of him whose door was closed became opened before he could maneuver and turn he crashed on the door of this vehicle which belonged to SARS. The men inside the vehicle turned on their engine leaving him to die on the floor as he laid liveless..those cowards, they break every rule and regulations guiding drivers on the road.. We have sat down and watch this leach turn into a virus without cutting it off..well its time we speak out..post this article and share anywhere you can and type one thing that these evil SARS MEN has done to you.. Don't cower in fear they are not stronger than we are..we should learn to speak out and stop dying in silence.. Our deepest prayers is with the man Mr Abraham aka Mr Yogi

We pray that your injuries get healed..