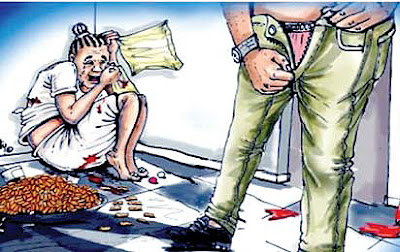 The men of Ogun State Police Command have arrested one 20-year-old  Segun Olaseni for allegedly having raping a  9-year-old girl.

The suspect was said to have been arrested last Sunday following a complaint from the father of the victim, Adepoju Akinyemi, who reported the matter to Sango-Ota Divisional Police Headquarters.

The state Police Public Relations Officer,  Abimbola Oyeyemi, said the father of the victim had reported that the suspect came to his house at the New life Estate Ota, while he was at his workplace and forcibly had carnal knowledge of his daughter.

Oyeyemi said on interrogation after the arrest, the suspect confessed to committing the crime, claiming that he exploited his closeness to the family since their houses were not far from each other.

He added that the suspect also said he met the girl alone in their living room from where he dragged her into her father’s bedroom and had sex with her.

Meanwhile, the state Commissioner of Police, Ahmed Iliyasu, has ordered the transfer of the case to the Anti-Human Trafficking and Child Labour Unit of the State Criminal Investigation and Intelligence Department, Abeokuta, for further investigation and possible prosecution of the suspect.