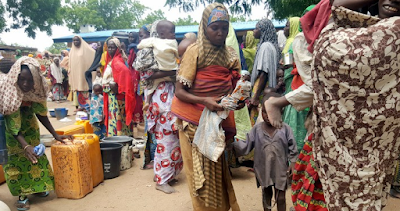 A lone suicide bomber was on Tuesday afternoon shot dead as he attempted to attack a military barracks in Maiduguri, the Borno State capital, a witness said.

The incident happened at about the time some internally displaced persons (IDPs) were busy burying five of their colleagues that were slaughtered by suspected Boko Haram insurgents around Nguro in Konduga Local Government Area.

Witnesses said the remains of the five locals, identified as IDPs, were on Monday found a day after suspected Boko Haram members attacked and beheaded them in Nguro village.

The victims were identified as residents of Balle Shuwari.

Balle Shuwari, located about 5km from Giwa barracks, was part of the communities sacked by Boko Haram.

The sack of the community led the victims to become displaced, thus living in the IDP camp in Konduga before the Sunday attack.