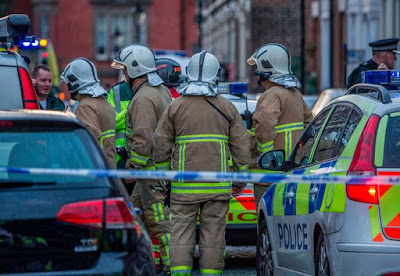 A man has been arrested on suspicion of murder after a woman and two children were found dead in their home. Police were called to an address on Falkner Street in Toxteth, Merseyside, at around 7.30pm on Tuesday after concerns were raised for those inside.

One witness reported hearing a "mad amount of screaming". Police found the bodies of a woman and two children and arrested a 30-year-old man.

It is believed the victims were a mother and her two children. Officers said the investigation was in its early stages, but believe it is "domestic related". They added police were not looking for anyone else at this stage. Families in nearby properties were forced to flee their homes amid fears there was also a gas leak related to the tragic incident.

Witnesses said a man was led out of a house in handcuffs.A man called Dan H appeared to give an account of the dramatic incident on Twitter.

He wrote: "Fire crews attempting to force the door of 34 Falker st. - next door to the house they've been in and out of.

"2 fire officers just forced into 34. Saw a woman outside being given oxygen about an hour ago"Called police after hearing 'mad amount of screaming' coming from 34.

"Then saw man running out the house in distress."Later saw man being carried from house followed by woman receiving oxygen.

"Rescue teams are still in and out 36 & continuing to evacuate residents."Forensic detectives were at the scene wearing protective clothing and gas masks.

Residents living nearby were asked to remain indoors and keep their windows closed as a precaution.

The arrested man has been taken to hospital after falling ill and police said a post mortem will be carried out to establish the cause of death of the deceased.