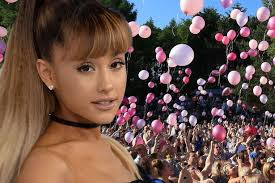 Ariana Grande's benefit gig this Sunday is a chance for fans at her Manchester Arena concert last Monday to heal, after the bomb which took 22 lives and maimed scores of other innocent people.

Now the One Love Manchester concert taking place at Emirates Old Trafford has already sold out - with all tickets going in less than six minutes.

Tickets went on general sale at 10am today, but by 10.11am the official Twitter account for the concert updated disappointed fans that all the spaces had gone.

The venue has a capacity of 50,000 compared to the Manchester Arena's 21,000, meaning there were still some 30,000 tickets left to go on general sale once the survivors had been given their free tickets.

Some will be standing in the middle of the ground on the grass - although no under-14s will be allowed on the pitch - and others will be seated around the outer rim of the venue.