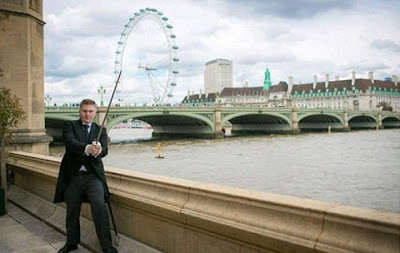 A journalist has offered ISIS £50,000 to fight him after posing outside Parliament with a sword in a bizarre stunt.

Andre Walker, a columnist for the New York Observer, posted a picture of himself with his cutlass on Twitter outside the House of Commons.

He said: 'A bounty on my head. Any #ISIS terrorist that kills me gets £50k. I'll give my address. No police. But I've got a sword. Good luck.' Walker responded: 'They are cowards who blow up kids and run people over. I'm suggesting a fair fight...with me.'

He later said that he would be 'changing his will on Monday.'  People immediately started saying the post was insensitive, while others simply continued mocking him.