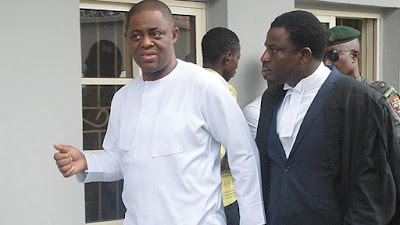 A Federal High Court, Abuja, on Tuesday adjourned the trial of former Minister of Aviation, Femi Fani-Kayode, until July 7, due to his counsel’s ill health.

The court on April 25 adjourned the matter for cross examination after the testimony of the first prosecution witness, Victor Ehiabhi.

At the resumed hearing, the defence counsel, Abubakar Yusuf, who stood in for Ahmed Raji, informed the court that the defence would not be able to cross examine the witness due to Mr. Raji’s absence.

Mr. Yusuf said that Mr. Raji was currently receiving treatment abroad and the prosecution had been informed of the development.

The prosecuting counsel, Johnson Ojogbane, who did not oppose the application for an adjournment, urged the court to make sure the defence cross examined the witness on the next adjourned date.

After listening to both counsel, Justice John Tsoho adjourned the matter until July 7 for the cross examination of the first prosecution witness and continuation of trial.

The News Agency of Nigeria reports that Mr. Fani-Kayode was arraigned by EFCC before Justice Tsoho, on a fresh five-count charge bordering on money laundering.

The ex-aviation minister was accused of allegedly collecting N26 million from the office of the former National Security Adviser, retired Col. Sambo Dasuki, and using same for media campaign.

Mr. Fani-Kayode is also facing another 17-count charge of money laundering before the Lagos division of the court.