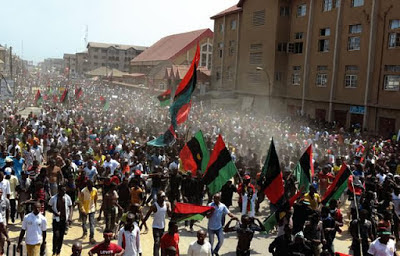 The Coalition of Northern Groups has called on the Federal Government to initiate a process allowing the Igbo to vote in a referendum that will allow them to have an independent state of Biafra.

The group, which comprised of the Arewa Citizens Action for Change; Arewa Youth Consultative Forum; Arewa Youth Development Foundation; Arewa Students Forum; and the Northern Emancipation Network, in a statement issued on Thursday, following the backlash that greeted its Tuesday statement in which a three-month ultimatum was issued to Igbo living in the North to leave the region.

“We urge the Federal Government of Nigeria as a matter of urgency to initiate the process for a peaceful referendum to allow the Igbo to go. Let them go.

We restate our determination and commitment to ensuring that the North will never partake in any contrived arrangement that would still have the Biafran Igbo as a component.

“We reiterate our call on Nigerian authorities and recognised international bodies such as the ECOWAS, AU and the UN to hasten the initiation of the process for the final actualisation of the Biafran nation and with it the excision of the Igbo out of the present federation,” the group said in a statement signed by its spokesperson, Abdul-Azeez Suleiman.

The group, which had on Tuesday urged Igbo leave the North for “their newfound country in order to allow other people have peace” said its statement was twisted out of context, hence the need for clarification.