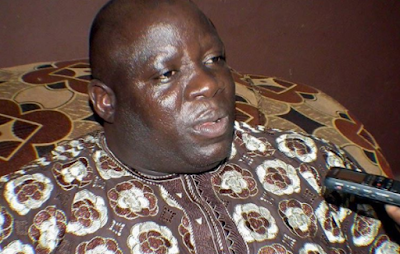 Efforts by the Lagos State Government to curb the activities of land grabbers popularly known as Omo onile received a massive boost on Thursday as the Special Task Force on Land Grabbing set by Governor Akinwunmi Ambode arrested one Kamorudeen Lamina, alias Sir K Oluwo, described as a notorious Omo onile kingpin, who has allegedly been terrorising the people of the state, especially residents of Ikorodu.

The Omo Onile Kingpin, who was arrested on Thursday, fell into the waiting hands of the taskforce when he was tricked out of hiding in a well-orchestrated operation carried out in the Alausa area of the state.

The Chairman of the Lagos State Special Taskforce on Land Grabbing, Jide Bakare, said his office received tons of petitions written by innocent residents deprived of their legitimate investment in landed property by the unscrupulous gang allegedly led by Mr. Lamina, said to have been a torn in the flesh of his victims.

Mr. Bakare, in a statement, said that the arrest of Sir K Oluwo by his team was a clear indication of the commitment of the Ambode-led administration to ensure that the lives and property of residents across the state was secured and protected under the law.

He said the state government had made its zero tolerance stance against land grabbing offences very clear, just as he assured that every legitimate investment made in the state would be protected by government.

Mr. Bakare further assured residents that information given by them against the nefarious activities of land grabbers will be treated with utmost confidence, a statement by Kayode Oyekanmi, assistant director of public affairs at the Lagos State Ministry of Justice, said.

According to him, the state government will immediately begin the prosecution of the arrested Omo Onile Kingpin, to serve as deterrent to others that no one is above the law in Lagos State.

While warning those in the act to steer clear of Lagos, Mr. Bakare also said the task force would intensify efforts to make the state unbearable for their nefarious activities.

Recall that earlier this year, at the commissioning of the new office of the Special Taskforce on Land Grabbing, the State Attorney General and Commissioner for Justice, Adeniji Kazeem, promised to go after any godfather aiding and abetting the criminal activities of the Omo Oniles in the state, saying “no matter who you are and your status, we will come after you and prosecute you”.