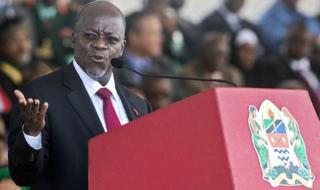 Many Tanzanians have condemned President John Magufuli's comments that schoolgirls who give birth should not be allowed to return to school.

An online petition has been set up to get the president to reverse his comments. Mr Magufuli warned schoolgirls at a rally on Monday that: "After getting pregnant, you are done."

A law passed in 2002 allows for expulsion of pregnant schoolgirls. The law says the girls can be expelled and excluded from school for "offences against morality" and "wedlock".

The online petition says that the president's support for the expulsion law would end the education of many girls and "propagate more discrimination".

It instead calls for the girls to be protected from early pregnancies while in school.

Tanzanians are also using the hashtag #ArudiShule(let her return) on Twitter to criticise the president's comments and to highlight the plight of young women who get pregnant while in school.