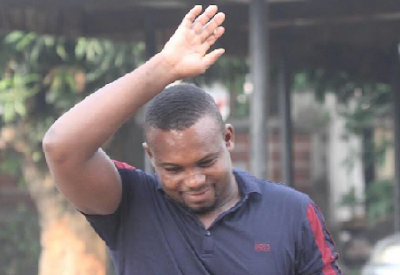 Okechukwu Brown, a father of three, was on Monday in Lagos sentenced to three years imprisonment for defrauding an American of 3,650 dollars in an online romance scam.

Justice Josephine Oyefeso of an Ikeja High Court handed down the verdict after Brown pleaded guilty to the charge.

The News Agency of Nigeria (NAN) reports that Brown was sentenced after entering into a plea bargain with the Economic and Financial Crimes Commission (EFCC).

As part of the terms of the agreement, he plead guilty to a one-count amended charge of obtaining money by false pretense.

The EFCC had also recommended a one-and-a -half year prison term in the plea bargain. Following his plea, Mr Uche Chikelue, the counsel to the defendant, quoting the Holy Bible, asked the court for mercy in sentencing Brown. “In Mark 10: 46-52, is the story of blind Bartimaeus, who was delivered by one word — mercy. Like blind Bartimaeus, we are standing on the word — mercy.

“My Lord, the defendant has been well behaved and has co-operated with the prosecution throughout the investigations.

“He has no past criminal record, has never been involved in any crime, he is a first-time offender, and he has refunded all the money stated in the information and has shown great remorse for his actions.

“He has aged parents, who due to his present incarceration, are having serious health challenges.

“He is the first born of the family and the breadwinner, he also has a wife and three children, the last, a toddler.

“My Lord, mercy is not qualified for, we humbly urge the court to temper justice with mercy because we know the court has a discretion to show mercy,” Chikelue said.

Sentencing Brown, Justice Oyefeso said: “In passing my sentence, I have taken into consideration the allocutus (plea) of the defence counsel.

“The court observes that this crime has taken ground in Nigeria and this court has to send the right signals to the public.

“This crime is a dishonour to our country and paints our great country in a bad light; there must be justice for the defendant, complainant and the country.

“I have also taken into consideration that the Criminal Law of Lagos prescribes 15 years in prison for the offence of obtaining money by false pretences.

“I hereby sentence the defendant to three years in prison on the one-count charge of obtaining money by false pretences.

“This sentence begins from March 13, the day he was first arraigned.” According Mrs V.O. Aigboje, the counsel to the EFCC, Brown committed the offence between Aug. 22, 2013 and Nov. 23, 2013 at Ikeja. The convict obtained 3,650 dollars online from Mr Thomas Nublin of the United States of America.

“The Lagos office of the EFCC in July 2014, received a petition from the U.S. Army alleging that some persons traced to Nigeria defrauded some members of the U.S. Army of over 13,000 dollars in a romance scam.

“The EFFC investigated and was able to trace some of the funds amounting to 3,650 dollars to EcoBank Plc via Moneygram which was received by the convict.

“The convict, in the course of the investigation, refunded to authorities, the said sum of 3,650 dollars, the money received from the crime,” she said.

The offence contravened Section 312 (3) of the Criminal Law of Lagos State 2011.