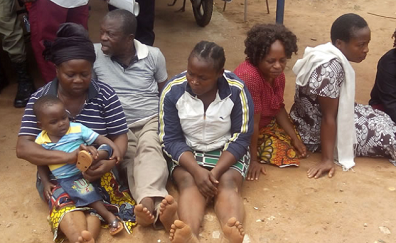 A 20-year-old woman, Chioma Fidelis, has confessed to how she parted with her two months old son, Favour Fidelis, in exchange for half a bag of rice, six chairs, cement and N200,000 cash.

Speaking to newsmen today when she and her accomplices were paraded by the police in Imo State, Chioma said she got pregnant out of wedlock, and that being unable to cater for the newborn, she opted to batter him for the aforementioned items.

Chioma, who hails from Ehime Mbano LGA of Imo State, said she had no option but to accept the offer, allegedly because the baby was suffering from kwashiorkor, and also because she had no husband to take care of her and the child.

Her female accomplice, one Chidimma Unakalamba, reportedly confessed to selling the baby boy to a couple, Mr. and Mrs. Jonas Anyanwu, who allegedly were in dire need of a male child.

She said the baby was sold for N600,000 to the couple. The baby has been recovered, though.

But a mild drama ensued when the couple insisted that they paid N700,000 for the child.

Unakalamba then admitted that she deducted N137,000 she spent on the child’s medical bills, and that she gave the mother N200,000 and pocketed the remaining.