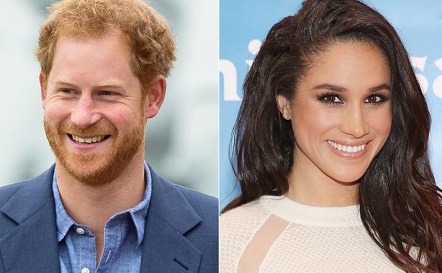 Prince Harry could be just weeks away from proposing to his girlfriend Meghan Markle, it has been claimed.

The 32-year-old royal could pop the question as early as next month and is looking to tie the knot with the American actress next year, a royal source told Heat magazine.

The long distance couple, who make huge efforts criss-crossing the globe to see each other, have been dating for roughly a year.

And now it seems Prince Harry is ready to take their relationship to the next stage. 'I'm told there will be a formal proposal, and it could be as soon as next month,' the source said.

Harry is reportedly having a ring made at Collins, the Queen's jeweller in Tumbridge Wells. Previous speculation has suggested he would give Meghan, 35, a family ring should he propose.

The source added that there is widespread belief the wedding would take place next year, perhaps in 'early spring'.

According to the Prince's biographer Katie Nicholl, Harry had a crush from afar on Meghan long before their relationship began, after spotting the glamorous brunette as Rachel Zane in the hit legal drama Suits.

But after meeting in person at Soho House, the pair quickly became smitten in real life.