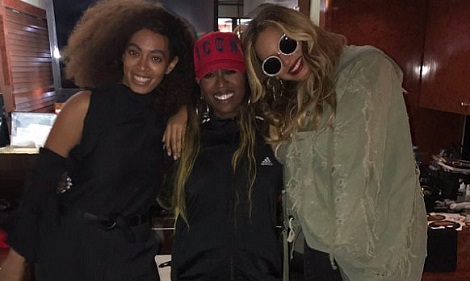 Beyonce was spotted at Missy Elliott's performance at FYF Fest at Exposition Park in Los Angeles  with her sister Solange, dancing to the music less than six weeks after giving birth to her twins.

The superstar songstress, 35, was seen dancing on the sidelines amid Elliott's outing on the stage, as she was one of many names in attendance for the performance, including Janet Jackson, Katy Perry and Tyler the Creator.

Elliott, 46, acknowledged Beyonce's presence by telling her, 'Hey girl,' amid her performance. The Lose Control singer took to Twitter to share a shot in which she posed with the famed sisters.

The Pass That Dutch artist wrote: 'Thank u to my good sis @solangeknowles u know how we do! #cancerseason!& my good sis [Queen] @Beyonce they always have shown me [love] & I am humbled.'