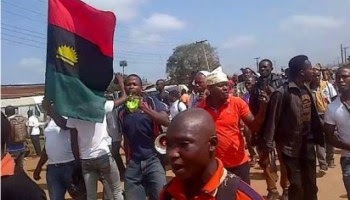 Hundreds of the Indigenous People of Biafra, IPOB, members, yesterday, allegedly stormed a police station in Rivers state to demand the release of three of their members who were allegedly arrested by the police yesterday while they were returning home after going to welcome their overall leader, Mazi Nnamdi Kanu who visited the state earlier, said one of the members.

Some of the members who took to their Facebook pages to announce the development claimed their members were arrested along Oil pipeline road and taken to the Obigbo police station in Rivers.

This called for a massive protest that yesterday as IPOB members stormed police station and demanded for their release or they will sleep in front of the police station.”

“After long wait in front of the gate by IPOB members, The DPO came out and said that they were arrested because they put road blocks along the road. He released them afterwards. WE ARE 1 BIG & HAPPY FAMILY IPOB!,” he wrote.