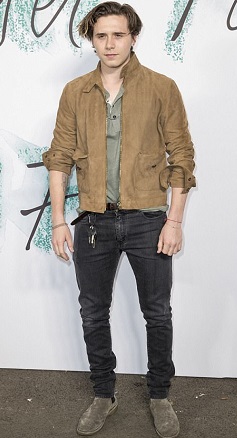 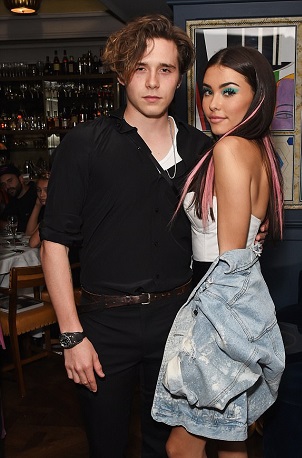 After spending the vast majority of his youth in the spotlight Brooklyn Beckham has conceded that fame has its ups and downs.

The 18-year-old son of retired footballer David Beckham and singer turned fashion designer Victoria Beckham admits life in the public eye is tough because he can't do "what most 18 year old's do," such as going out partying.

He told Entertainment Tonight: 'I feel like it has its ups and downs. I feel like I get opportunities that most people my age don't get.

Brooklyn admitted that he initially felt the pressure to follow in his dad's footsteps by playing football professionally but now knows he'd much prefer to carve out his own photography career.

He added: 'I had a lot of pressure on me. Every time I made a mistake everyone was looking at me like, "Oh my God, like, he made a mistake." I still really enjoy it and I still watch it with my dad all the time. But I kinda just wanted to go in my own direction.

'I'm actually moving to New York in August to study photography for four years. I'm really excited. Photography is [it], that's what I really want to do. I mean, I love taking photos.

'So I think this is it for me. I've been interning for [British fashion photographer] Nick Knight, which was really fun, it was really cool to do. He's an awesome guy. He puts me to work!'

Over recent weeks the teenager has been romantically linked to American singer and actress Madison Beer.

But despite her recently insisting the pair are just friends, she has still been targeted by social media trolls, who have encouraged her to kill herself and flooded her online feeds up to '30 times' a day.

Speaking on the Z100 Morning Show, she shared: 'I deal with this every day; I wake up and have been told to kill myself like 30 times already; it's crazy. It's definitely what comes with it, and a lot of people say, "Yeah, but this is what you signed up for."

'I think that's such a shame to say. It shouldn't come along with me making music and following my dreams. It's upsetting those two go hand-in-hand now because of social media.'