Must Read! The Very Deep Messy Lifestyle Of Superstars Using Mel B & Husband As An Example 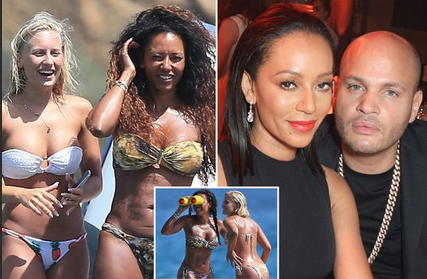 Hmm, this revelation takes the world deep into the bizarre lifestyle of super stars and what you would have said they can never do. It’s just deep deep irritating, plus the love they share outside is mostly fake!

Gilles has dramatically hit back at the star who dragged her into a bitter divorce battle. The German model said being filmed romping with the ex-Spice Girl and her movie producer husband Stephen Belafonte made her feel “very uncomfortable”.

She stated she believed the sex footage is on mobiles owned by the couple – and that she’s terrified of it appearing online.

In the bombshell 128-page libel lawsuit filed by her legal team late on Friday, Lorraine added: “These recordings would be extremely embarrassing to me and my family… I do not want any of them to become public.”

Married Lorraine has been caught up in the warring couple’s crossfire ever since 42-year-old Mel B filed for divorce after 10 years of marriage in March.

The singer and X Factor judge alleges the nanny had an affair with her husband behind her back, fell pregnant by him and then had an abortion.

She also accuses Belafonte, 42, and Lorraine of taking money from her. But the nanny has steadfastly denied the baby she was carrying was Belafonte’s.

The papers have been released by her legal team in the latest stage of her bid to clear her name – and to fight a hate avalanche against her online after being branded a “homewrecker” by Mel B.

In the dossier, lodged with California’s Superior Court, Lorraine revealed how all three enjoyed sex together.

She said in the papers: “My sexual and employment relationship with Melanie continued for approximately seven years until September 2016.

“During my time with Melanie, she and I had sex sporadically, sometimes having sex multiple times in a week.

“On the other hand I never had any sexual relations with Stephen without Melanie’s instruction and without ¬Melanie’s actual or apparent consent.

“At no point did I represent to Melanie that I was pregnant with Stephen’s child.

“The only times Stephen and I had sex was when Melanie instructed Stephen and I to do so. Or when Melanie herself invited her husband to join us in the bedroom, at which point Melanie would often serve as the “camera man” and record the sexual encounter or take part in the menage a trois herself.”

The legal papers, written in her own words, also blasted claims she was colluding with Belafonte to release a hoard of sex videos of Mel B – insisting she does not possess any footage.

Lorraine admitted she sent the former X Factor judge an X-rated email saying she was looking forward to them sharing a sex act at the weekend, adding: “It has been too long!”

And she refuted claims she was holding sex tapes and private possessions in a storage facility – adding that the lock-up was in Mel B’s name. Lorraine said she is now working as a waitress, but has been forced to take legal action because of the accusations.

In the papers she stated: “I have been actively trying to move past my time and relationship with Melanie. I simply wish that she shows me the same respect I’ve shown her over the past seven years.

“However this lawsuit became necessary after she refused to leave me alone and spread a number of lies about me and my relationship to her family on an international scale, all to benefit herself in her divorce proceedings.”

Revealing her hell at the hands of internet trolls, she said in the dossier: “I have… received countless messages, threats and insults from random persons all over the world, shaming and degrading me based on the false image of me created by Melanie.”

Lorraine describes in the court documents how she arrived in California from her native Germany in 2009 when she was just 18.

She met Mel B and Belafonte at a restaurant in West Hollywood when she spoke little English.

She claims within days of meeting, Mel B invited her back to her home and after enjoying drinks they had “consensual group sex together”. After six months in LA studying English, she returned to Germany. But she was offered a job by Mel B as a nanny for her three daughters, Madison, Angel and Phoenix.

She claims Mel B helped her get a visa for the US, telling the authorities she was a “full-time caregiver for her children”.

But she was sacked from her $6,666-a-month job in September 2016 after finding herself “caught in the middle of intensifying marital arguments between the couple”.

Court papers shows she was handed a $30,000 severance package.

Since Mel B named her in her divorce case – in which Lorraine claims she was portrayed as a “conniving and backstabbing homewrecker who has extorted mass sums of money from Melanie” – she has received a string of threats.

In the papers, she said people were now “viewing me as an ‘evil woman’ based on the statements made by Melanie”.

She said she had been tormented online by trolls from across the globe.

But Lorraine has always denied ever claiming to be pregnant with Belafonte’s child, revealing it was a one-night stand with a man she met at a bar in Hollywood.

She even claims Mel B paid for her abortion.

Lorraine said in the papers: “Stephen and I never told Melanie I was pregnant with Stephen’s child in 2014, as is stated in Melanie’s declaration. Rather, I discovered I was pregnant several weeks after I went out for drinks with a friend at The Den in West Hollywood and had a one-night stand with a man I met at the bar. I immediately sought guidance from Melanie and spoke to her privately about the pregnancy. I felt comfortable approaching her because of our close relationship.

“At no point did I suggest or imply that I believed Stephen to be the potential father of the child. In fact, I had not had group sex with Stephen for several months prior to my unexpected pregnancy.

“Instead, Melanie herself assisted me with arranging a medical appointment, advanced the cash for the procedure, and booked a hotel for me to stay in to recover.

“On several occasions, Melanie actually visited me in the hotel and brought her children to make my recovery more pleasant.”

During her time working with Mel B, Lorraine claims Belafonte paid $60,000 to her husband Michael Bleau to help his start-up business – not as a pay off.

Lorraine also claims in the papers that in late 2014, while in the UK, Mel B took “an entire bottle of aspirin” and was hospitalised – this incident took place in the latter stages of The X Factor.

In the papers, she tells how one of Mel B’s daughters gave her a handwritten note thanking her for her work in which Mel B wrote: “I write this to say not only thank you for everything you have done for my kids, but also sorry.”

Mel B has filed five separate legal motions against Lorraine in a bid to strike out her libel lawsuit from court. 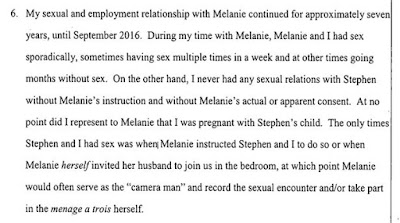