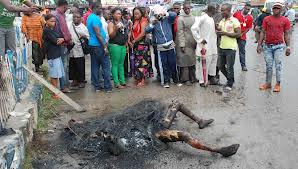 A mob roasted a yet to be identified middle-aged man alive for allegedly stealing a phone estimated at N45,000 in Mushin area of Lagos.

A female tenant said to have seen him with a Samsung Galaxy phone , raised the alarm which alerted residents.

Eye witnesses said that the suspect initially denied the allegation, stating rather that he lost his way. He later admitted , blaming his indulgence on hunger.

His passionate plea for forgiveness fell on deaf ears as he was beaten to a pulp and set ablaze before the arrival of policemen from Area ‘ D’ command.

Spokesman for the Lagos State Police command, , Olarinde Famous-Cole, who confirmed the incident, said that one person had been arrested in connection with the mob action.

He gave the identity of the arrested suspect as Isiaka Kolawole, adding that he was being interrogated at the Homicide section of the State Criminal Investigation and Intelligence Department. SCIID, Yaba.

He said: “Preliminary investigation revealed that the deceased was accused of stealing a galaxy phone from a house, in Mushin. An angry mob lynched him.”