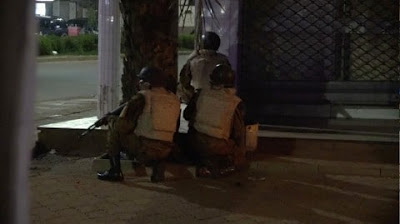 At least 17 people were killed and eight others wounded after a number of assailants attacked a restaurant in Burkina Faso around 9 p.m. yesterday.

The attack took place in Ouagadougou, the capital of the West African nation. It's not known how many attackers were involved.

Attackers barricaded themselves in the Istanbul restaurant on Avenue Kwame Nkrumah in the center of the city.

Burkina Faso Communications Minister Remis Dandjinou called the raid a "terrorist attack," according to Reuters, and said the victims were from a number of countries. Efforts are underway to identify the bodies so the authorities can inform their families.

The Prosecutor's Office is investigating the incident.