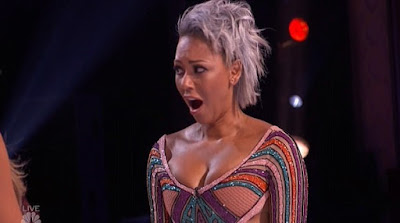 Mel B has spoken out over comments made by her America's Got Talent boss and co-judge Simon Cowell on Tuesday.

After a disappointing magic act, Simon, 57, likened the routine to Mel's wedding night - saying it had 'not much promise or delivery', to which she threw a cup of water at him and stormed off set.

In an interview with E! News, Mel said: '[Evie Clair] really made me cry because it made me think about my dad, and my dad recently passed away from cancer also, with an almost eight to nine years struggle.'

Explaining her anger, she continued, 'She just sounded so beautiful and I couldn’t stop crying, so I go from that to Simon saying something so rude and inappropriate.'

On Tuesday, Mel, 42, - who is going through a bitter divorce with Stephen Belafonte - split her dress in the commotion, before branding the show boss 'stupid' and suggesting he had been insensitive about her father's death.