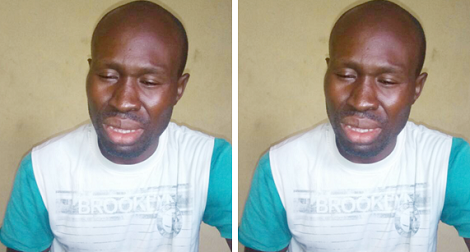 A man identified as Abiodun Onipede has been arrested for attempting to commit suicide over his inability to refund a fifty Thousand ‘Lapo’ loan.

Onipede who was arrested by the Anti-Vandal team of the Nigeria Security and Civil Defence Corps, Ogun State command while attempting to mount the rope in the bush along Ayetoro road in Abeokuta to take his life .

Vanguard gathered that he had tied the rope to a big tree and was about hanging himself when a member of the team who wanted to ease himself in the bush stumbled on him and stopped .

It was further gathered that, the Suspect, a commercial Tricyclist was a 200 level drop-out of Federal College of Education, Osiele due to financial incapability. Onipede had lost one of his children due to his inability to pay the hospital bills.


He had raised money for the child surgery which was successful but, later lost him after complication .

While speaking with newsmen, Onipede, a 34-year old father of five said he was a former staff of Traffic Compliance and Agency in the state.

He said his inability to perform his responsibility as the head of the family led him to attempt suicide . He added that his failure to pay the ‘Lapo’ loan, an informal money lender syndicate forced him to take the decision to take his life.

‘Lapo’ loan is a popular loan among the Yoruba entities; where people are being lent money with a high interest.

According to him, I am a 200 level Drop-out of Federal College of Education, Osiele, I dropped out because I could not get financial assistance to continue.

“Due to the health problem of my child in 2008, I had to drop out so that I could have some money to take care of my sick child.

But, we later lost the child in 2009 because we were unable to pay some hospital bills after people have helped us in raising money for the surgery.

“I was duped by some people and they even threatened me, and this made me to leave Abeokuta for Akwa-Ibom state.

It was when I came back after a year that I discovered I have been sacked from the TRACE.

“I am frustrated because am owing a lot of people ranging from house bill to electricity bill, and some other bills.

I am ashamed of myself because am not a responsible man, I cannot cater for my family as a head.

“The Lapo officials have used OPC to arrest my wife because of the money, if not for the help of my pastor.

Am just frustrated because I have to pay N3,000 every Friday and I am presently jobless. And I still have like N24,000 to balance .

“I cannot pay the hospital bill of my mother, I can’t take care of her, I was told she is now on the street begging to survive.

No family to help me, we have been living in abject poverty. “What added to my conclusion to commit suicide was due to my inability to refund the ‘Lapo’ loan I collected when I wanted to start my tricycle business.

The officials of the Lapo have been giving my family tough times for sometimes now, because, I cannot afford to be repaying N3,000 every Friday”, he said.

He however, said he regretted his action, saying, “ it was not my fault, am just a frustrated man that does not know what else to do.

“I wish to go back to school; I want the government to help me with a job that can cater for my family and other things that are important”.

Meanwhile, the Public Relations Officer of NSCDC, Ogbonnaya Dyke described it as a crime against the state for someone to try to take his life.

Ogbonnayah added that the suspect will be handed over to the police, after the NSCDC Intelligence Unit has done proper work.

His word, “Since the matter is under our Crisis management team, we have to swing into action to address the situation.

“It is a crime against the state for someone to try to take his life. Necessary actions will be taken by the Corps in addressing the situation.

He is going to be handed over to the police after our intelligence Unit has done its proper work”.