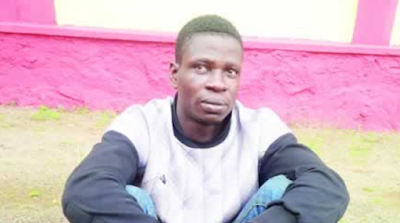 The Ogun State Police Command has arrested a 33-year-old farmer, Azeez Kelani, for allegedly hacking his colleague, David Adima, to death after stealing his crop.

Punch Metro learnt that Kelani had gone to Adima’s farm at Sojuolu village, Ibogun, in the Ewekoro Local Government Area of the state to steal some tubers of cassava.

It was gathered that Adima, who hailed from Benue State, caught the suspect in the act and raised the alarm.

The suspect, who was armed with a machete, reportedly resorted to force and eventually slit the man’s  throat with the cutlass.

The victim was said to have bled to death.

The Ogun State Commissioner of Police, Ahmed Iliyasu, who paraded the suspect on Monday at the state police command headquarters, Eleweran, Abeokuta, said the incident happened on August 13, 2017.

Kelani was among 43 suspects paraded for offences ranging from child trafficking, armed robbery to kidnapping and murder.

“The suspect hacked the farmer to death to cover up his crime,” the CP said.

However, Kelani denied killing Adima, saying the deceased had wanted to attack him with the machete and two of them started struggling.

He said, “The machete slit Adima’s throat during the struggle.”

Also paraded was a suspected human trafficker, Paul Aganla, who was arrested on August 26 at Isiu, in the Owode-Egba area of the state.

The CP said the native of Ogoja, Cross River State, was caught with six children whose ages ranged between seven and 13.

Aganla was said to have brought the children from Cross River to Abeokuta, to allegedly use the for child labour.

Three suspected armed robbers, who specialised in robbing filling stations across the South-West states, were also paraded by the command.

The leader of the gang, Ganiyu Oladeji, confessed that the gang had robbed three filling stations in Ogun, Oyo and Kwara states, adding that they got a lot of cash from the operations.

He said, “We normally carry out our operations on weekends when many of the filling stations’ management will not take their money to banks.

“We burgle their strongrooms and take whatever money we find there. There was a time we got N220,000 from one of the filling stations in Abeokuta.”

Thirty nine hoodlums, who were said to be terrorising residents of Wawa, Kara and motorists on the ‘Long Bridge’ end of the Lagos-Ibadan Expressway, were also paraded.

One Zubairu Umaru was said to be the leader of the gang on the expressway.

Umaru also reportedly supplied hard drugs to his gang members to influence them to carry out the “nefarious activities.”

The command said it rescued two herdsmen, who were abducted by kidnappers on August 25, in a forest in the Alamala area of Abeokuta.

Iliyasu said during the rescue effort, some of the kidnappers escaped with gunshot wounds.