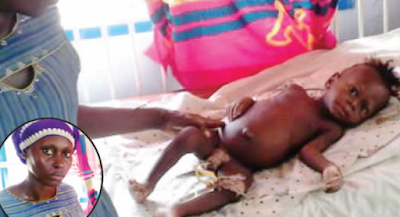 Aishatu Usman’s modest apartment in a busy neighbourhood at Abattoir, Agege, Lagos was full of sympathisers last week. It was also filled with cries of anguish. The apartment, a shack, was constructed with zinc and a few planks of cheap wood.

The sun was out and the heat in the shack was thick and unbearable. But the sympathisers, most of them women worked tirelessly, begging Usman to stop wailing.

But the tall, thin woman would not be easily dissuaded. She wailed: “That woman killed my son.” Still holding on tightly to the lifeless body of her nine-year-old son. She would not stop crying and she refused to let go.

The cut of death

As she cried, Punch correspondent noticed that her pink top was wet with drops of milk seeping out of her engorged breast. By this time, the skin of the little boy, who will never suckle, had grown pale. The woman whom Usman blamed for the death of her son was a traditional birth attendant. She had provided two services for Usman: she helped to deliver her of her son and she also helped to circumcise the little baby. It was the second service that turned out to be fatal.

According to the United States National Library of Medicine, circumcision is one of the world’s most widely-performed procedures by health workers. It is a religious or cultural ritual for many Jewish and Islamic families, as well as some tribes in Africa and other parts of the world.

However, many Nigerian parents who circumcise their male children do not seek out qualified health professional.

One of Usman’s neighbours, who spoke on condition of anonymity, said the ill-fated boy must have died from prolonged bleeding.

She said, “After her son was circumcised, he began to bleed. Usman noticed the bleeding and then called the traditional birth attendant who circumcised him, but she kept giving excuses that she was busy at the time. They spoke on the phone. The TBA later said she would come to her house a bit late. As each hour passed, the bleeding became worse. I guess her son lost a lot of blood.”

Usman, while narrating what happened to her son, put the blame on the birth attendant. Speaking to the small crowd of sympathisers who were in the room, she said the TBA didn’t circumcise her son properly.

The cut of injury

Eudora Michael’s son is also a victim of a botched circumcision. The 35-year-old mother regrets the day she chose a TBA to circumcise her son. Her son’s penis was cut off during circumcision. She told Sunday Punch that her life wouldn’t ever be the same because of her son’s condition.

Michael said she regretted allowing her step-father, who is a traditional doctor, circumcise her son when he was one-month-old.

She said, “After my son’s penis was cut off, my step-father said it would grow afresh within three weeks. He then rubbed all sorts of concoctions on my son’s private part. Till today, my son’s penis has not grown back. I am heart-broken.

“I regret my action; every day I wish I had taken him to a proper health clinic for circumcision. There are days when I cry for hours. I know my son’s life would never remain the same. We travelled to India with the hope that his penis would be reformed by the doctors there, but they said nothing can be done until he is 14 years old. I broke down into tears when I heard them say that.”