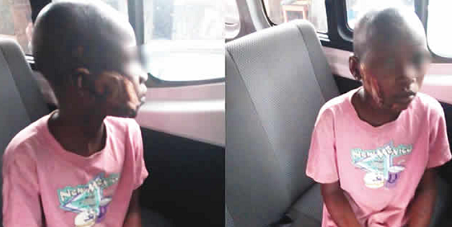 A guardian, Mr. ThankGod Madubuchi, and his wife, Juliet, have been arrested by policemen from the Ilupeju division, for allegedly torturing a 10-year-old girl, Chinansa, with a hot iron.

Punch Metro learnt that Chinansa was ThankGod’s niece and she had been living with his family at their house on Anjorin Street, Mushin, Lagos State, for some time.

ThankGod and his wife were alleged to have always assaulted the victim over minor offences, as appeals from neighbours fell on deaf ears.

However, matter came to a head on Tuesday, September 5, when the couple used a hot iron to torture the victim.

She was reportedly accused of licking powdered chocolate beverage (tea) without permission.

The couple were said to have locked her up in the house, which drew the attention of residents who alerted officials of the Lagos State Domestic and Sexual Violence Response Team.

An official of the agency told a Punch correspondent that neighbours attested to the regular abuse of Chinansa.

He said, “The abuse had been going on for a long time. We were informed that in the past, the man’s wife used razor blades to cut her in different parts of the body because she mistakenly tore her (Juliet) clothes. The neighbours didn’t raise the alarm that time because they thought the couple would change until the one that happened on that Tuesday.

“The girl was accused of licking powdered beverage without permission and the man used a hot iron to torture her. He then locked her up in the house without taking her to a hospital. Residents, who feared for the girl’s life, alerted the DSVRT.”

Punch Metro learnt that policemen from the Ilupeju division arrested the couple as two officials of the DSVRT and an officer of the Child Protection Unit rescued the victim from the house.

The couple were arraigned  before a family court at the Ogba Chief Magistrate’s Court on counts bordering on child abuse.

The defendants, who pleaded not guilty to the charges, were granted bail by the Chief Magistrate, T. Akanbi.

A DSVRT survivor advocate, Mrs. Tumininu Oni, appeared in court with the Investigating Police Officer, Inspector Roseline Ilekhue, who was represented by one Inspector James.