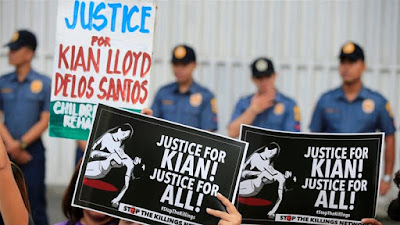 An entire city police force in the Philippines has been fired in metropolitan Manila after some of its members were suspected in the gruesome killings of three teenagers and others were seen on surveillance cameras robbing a house.

The officers will undergo 45 days of retraining, after which those facing no charges can be reassigned to other stations.

The Department of Justice has started an investigation based on a murder and torture complaint against four Caloocan policemen allegedly linked to the killing of 17-year-old student Kian Delos Santos during an anti-drug raid last month.