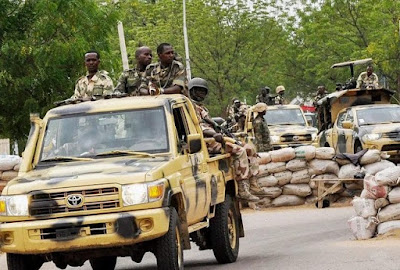 Nigerian troops fighting Boko Haram insurgents in North-east Nigeria have complained that they have not received their allowances in the last two months.

Some of the soldiers who disclosed this to Premium Times in Maiduguri, the Borno state capital on Friday said the situation was causing them hunger and deflating their morale.

The soldiers whose identity cannot be revealed because they are not allowed to talk to journalists, said they are paid N30, 000 monthly as operation allowance and ration cash allowance (RCA).

“We are being forced to reach out to the media, not because we want to indict anybody, but to cry out and let the world, especially Nigerian government, know that we are dying of hunger here due to unpaid allowances”, said a ranked soldier who spoke to Premium Times reporter on phone.

“We that are under Operation Lafiya Dole are supposed to be paid special allowances of N1, 000 daily which amounts to N30, 000 or N31, 000 monthly as the case may be. But in the last two months now, nothing has been done in that regard.

“Also our RCA which takes care of the feeding of soldiers have also been defaulted, and this has left us in very dire situation with little or no morale to continue fighting.”

Officials at the Military Command and Control Centre, Maiduguri, confirmed the development but partly blamed it on the inefficiency in the banking system.

The aggrieved soldiers said they could not understand why they should be owed allowances since August even though those in authority knew how important the stipend is to them.

Another soldier of the junior rank cadre told Premium Times that the monthly stipend ought to be N45, 000, but the authorities deduct N15, 000 for common pool feeding for the troops especially those on the frontline.

“In the past, they used to pay it regularly. But now we are being owed for two months and we are already in the middle of October”, he said.

“September was the second month that we have not been paid and you should know that it is affecting our morale because if you are working and what is due to you is being owed, it certainly affects your attitude to work. So we beg whoever that is holding this money back to kindly help us out”.

When Premium Times contacted the headquarters of the Operation Lafiya Dole in Maiduguri with the soldiers’ complaints, the Deputy Director Army Public Relations, Onyeman Nwachukwu, a colonel, responded in a brief text message that the Command was not unaware of the challenges the troops are facing.