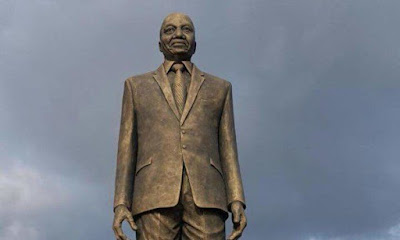 The Civil Society Network Against Corruption has described as “embarrassing” the visit and honour of South Africa’s President Jacob Zuma by the Imo State governor, Rochas Okorocha.

Lanre Suraj, CSNAC’s Chairman, said in a statement on Sunday the honour bestowed on Mr. Zuma would embolden the president to tell his people he is celebrated abroad.

Mr. Zuma, who is facing multiple accusations of corruption, fraud, and money laundering in his country, arrived Imo State on a two-day working visit on Friday.

The South African government said Mr. Zuma would be in Owerri, the Imo State capital, to “strengthen socio-economic relations and further deepen existing cooperation in the field of education.”

“Apart from allowing Mr. Zuma to address a group of selected secondary school students and other young people, Governor Rochas Okorocha directed a traditional ruler in Imo State to confer a chieftaincy title on him,” Mr. Suraj said.

While in Owerri, Mr. Zuma bagged the chieftaincy title ‘Ochiagha’ (Warlord) as well as had his statue unveiled in the state capital.

“It is embarrassing that a state government controlled by the All Progressives Congress which is fighting corruption could play host to Mr. Zuma, allegedly a corrupt leader in the current assembly of heads of state in the African Union and portray him as a hero before a group of African youth,” Mr. Suraj continued.

“Is Governor Okorocha not aware that Mr. Zuma has been found guilty of corruption by the courts in South Africa and has been ordered to refund the $500,000 stolen from the public treasury to expand his private house to accommodate his many wives?

“Is Governor Okorocha not aware that Mr. Zuma has also been indicted for allowing an Indian family to influence the appointment of his cabinet members?

“In asking President Zuma to address officials of Imo State government, is Governor Okorocha not aware that the people of South Africa are currently demanding for the resignation of a leader who has brought shame and dishonour to the country of Nelson Mandela?”

Last year, a South African Court ruled that Mr. Zuma violated the constitution by using public funds to upgrade his private residence, leading to the president apologizing to his countrymen.

Mr. Zuma has also battled allegations of infidelity and rape – he fathered a child with a woman who was not among his four wives and was acquitted of the rape charges.

“We are not surprised that ex-President Olusegun Obasanjo was on hand to welcome and celebrate his friend, President Zuma. It is a case of show me your friend and I’ll tell you who you are.”