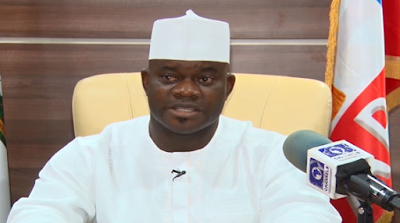 Kogi State government has banned the activities of the Joint Action Committee (JAC) of Trade Unions of Tertiary Institutions and all forms of unionism in the state-owned tertiary institutions.

The government made the announcement in a statement signed on Wednesday by the state governor, Yahaha Bello.

The government said it respects the rights of all citizens to responsibly associate and pursue their welfare within the ambits of the Constitution of the Federal Republic of Nigeria, the laws of the state, the rights of other citizens and the general norms of a democratic society.

It added that it respects the rights of labour unions in relation to the responsibilities of the owners and proprietors of tertiary academic institutions.

It also said it has made tremendous progress in resolving all issues relating to adequacy and frequency of remuneration for all categories of civil servants in the state.

The state government, however, accused the unions in the state-owned tertiary institutions of impeding its efforts to carry out wholistic reforms of the civil service through their “unjustified and unjustifiable industrial actions.”

“The branch of the Joint Action Committee (JAC) of Trade Unions of Tertiary Institutions Owned by Kogi State in Kogi State Polytechnic, Lokoja, has proceeded on yet another strike for alleged non-payment of salaries and emoluments irrespective of clear evidence of Government’s good faith and efforts contradicting JAC’s position.

“Evidence of massive embezzlement of the Kogi State Polytechnic’s earnings in excess of N157m committed under JAC’s nose and government’s efforts to bring the fraudsters to justice have not persuaded JAC to work with government to resolve all extant issues bedevilling the institution’s cash flow,” the statement said.