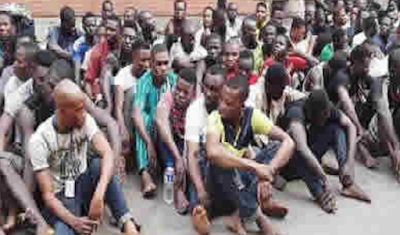 Troops of the Nigerian Army participating in the ongoing Operation Crocodile Smile II have arrested at least 85 suspected smugglers, drug dealers, robbers, kidnappers and hoodlums in Lagos and Bayelsa states.

Punch  correspondent learnt that while 55 suspected smugglers and hoodlums were arrested by the 81 Division, Victoria Island, Lagos State, 30 suspected cult members were apprehended in Bayelsa by 6 Division, based in Port Harcourt, Rivers State.

The army operation, Crocodile Smile II, which started on October 4, covers the South-South and the South-West regions, and will last for four weeks.

It was learnt that the troops, divided into Sectors 1 to 5, raided Onigbongbo, Ikeja, Oshodi, Isolo, Marina and Maroko areas in Lagos as well as Ibafo area in Ogun State in the past week to make the arrests.

Some of the suspects are identified as Abdulazeez Akim, Paul Ishaya and one Emmanuel, who had been handed over to the police, the Nigerian Customs Service and the National Drug Law Enforcement Agency.

The 81 Division’s spokesman, Lt. Col. Olaolu Daudu, said, “Troops in conjunction with the Nigerian Customs Service also recovered a fairly used car at Ajilete while on an anti-smuggling operation.

Also, troops of Sector 5 in conjunction with the NDLEA carried out a raid on Badagry Fibre Market and Marina area. Twelve suspects were arrested and handed over to the NDLEA.

“The General Officer Commanding, 81 Division, Maj.- Gen. Peter Dauke, reassures the public that the army exercise will continue to operate within the Code of Conducts and Rules of Engagement. The public should continue to give credible information to the military.”